If you can’t beat “Ëœem, join “Ëœem! So goes the mantra of the group BellKor’s Pragmatic Chaos, an international coalition of four previous teams, whose combined efforts to develop a new movie suggesting algorithm for Netflix have finally scored high enough to claim the prize. 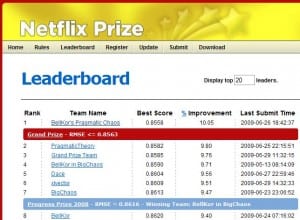 Netflix uses a movie rating algorithm called Cinematch to predict what users will rate movies, based on their previous rental and rating history. This tool is crucial to the Netflix experience, which keeps users happy by suggesting new movies for them to rent and enjoy. Users then continue renting movies, and Netflix continues making money “" it’s win-win.

The Netflix Prize is very similar to the X-Prize, which offered‚ $10 million for the first private group to build and launch an aircraft that could leave the atmosphere, or the Archon X-Prize, which offers the same amount to the first group who can sequence an entire human genome for under $1,000.

Netflix started the Netflix Prize program in November 2006, offering a cash prize to anyone who could better their Cinematch by 10%. Hundreds of groups have signed on, and have posted their scores on the page for the Netflix Prize. While many of the groups have been flirting with the 10% goal, until now none have scored sufficiently high enough. In interviews, some group members have expressed that the task might prove impossible.

Sensing this, PragmaticTheory and BellKor in BigChaos combined their efforts, and have posted a combined algoithm which represents a 10.05% improvement, which, pending verification, should prove sufficient enough to clinch the prize. When and if Netflix will incorporate the group’s method ‚ into (or instead of) Cinematch is still up in the air. Still, this is an exciting time for movie lovers everywhere.