If you haven’t noticed, people tend to die at the most inconvenient times. It’s a sad fact of life. 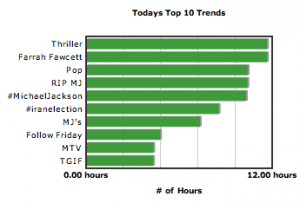 AOL found this out the hard way when the company’s AIM service went offline at around 5:00 PM EDT, right as the news of Michael Jackson’s death started passing around the Internet. The company had previously planned a routine software update that shouldn’t have interrupted users’ normal experience.

Instead, the surge in traffic as everyone was all atwitter over Michael Jackson’s death strained the company’s servers too far, and AIM went offline. Service was restored about forty minutes later. 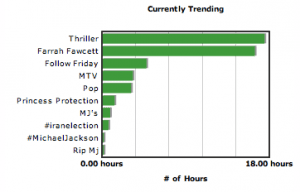 We wouldn’t go as far as to say that the AIM outage forced users to use other communication platforms, but AIM was far from the only site used yesterday. Trendrr reported 250,000 tweets mentioning Michael Jackson and Google News found more than 3,000 articles written about him yesterday alone. Keynote Systems, a company who tracks website performance, noted that the average time to access a news website doubled from 4 to 9 seconds yesterday.

Michael Jackson’s passing is a sad event, but as the currently trending topics show, many are honoring him with their tweets, a trend certain to continue.