When the Wii first released in November of 2006 bundled with Wii Sports, our first perceptions of the new hardware from Nintendo came from the sports mini-game collection and Wii Tennis; the addictive and simplistic game was intriguing to say the least. Fast forward almost four years and the Wii library of titles has yet to include a full-out tennis title, a sad truth given the intuitiveness of Wii-remote control and the swinging motion of the tennis racket. However, EA Sports, the award winning group responsible for everything from the 20-year-old Madden franchise to the perennial accolade-earner NHL series, have put a great deal of time and effort into Grand Slam Tennis, their latest body of work. Bolstered by the true 1:1 motion tracking of the Wii MotionPlus peripheral, does Grand Slam Tennis waggle and fail, or rip a forehand down the line? Let’s find out.

First off, Grand Slam Tennis is not your mother’s tennis game. You’ll be as animated as the characters on screen when you miss a forehand or when you cannot believe your opponent smacked that passing shot perfectly, painting the baseline. The learning curve is painfully substantial but ultimately redeeming when given the time and effort needed to master such a sport, albeit in video game form.

Character creation is where the fun begins. The create-a-dude mode enables you to choose from a limited, but deep enough assortment of face, hair, clothing, and interestingly play-style options. For my guy, I chose “Offensive Baseliner” the type skilled at long rallies and offensive power strokes from the baseline, but a significant number of options are also at your fingertips, including “Net Master” “Defensive Baseliner” and others. I would have loved to see a personality type modifier, so when I missed a shot on screen my character would either take the fault in stride or smash his racket and scream expletives at the chair umpire, but maybe that’s asking too much. 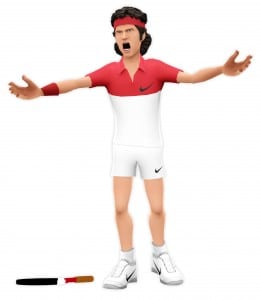 With the Nunchuck attached to the Wii-remote you’ll have to manually guide your athlete around the lines of the court, but believe me, through exhaustive and frustrating first tries with only the Nunchuck, this in the only way to play Grand Slam Tennis if you don’t want to rip your hair out. See, if you play using only the Nunchuck, your mini-me will often, and painfully, run around a forehand to hit a backhand, ‚ get stuck somewhere in the middle and force an off-balance shot, or will plain miss the shot. And in tennis, a point for point competition, the slightest mistake can make all the difference. 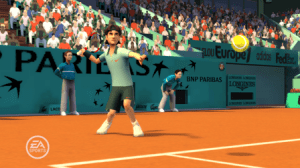 Now that we know how to play the game let’s find out why you want to play tennis in the living room instead of outside, under the sun, on the court.

The first thing you’ll notice about Grand Slam Tennis is the clear stylized approach to the game’s assorted environments and character models. EA didn’t go for realism in terms of presentation, but that mark does the game no damage and is a good decision, if I am to throw my opinion in the mix. Why strive for what the Wii cannot achieve graphically? Players’ heads are too large, legs too skinny, and the glowing yellow tennis ball is the size of a softball, but none of these factors are detrimental to the tennis feel of the game. The game’s 12 courts at four different locations are accurately presented even in the cartoon style. Anyone who has ever watched tennis on television or been to a live event can attest to the simplicity of the sport. A rectangular court, adorned with white lines, two poles, a net, and seating all around is all you need, and EA did a remarkable job replicating the game’s real world locations. That said, advertising is a HUGE part of the sport of tennis commercially, and when you play Grand Slam Tennis you’ll be inundated with ads at every turn. 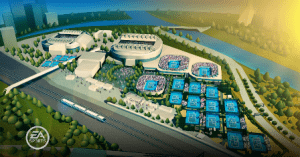 The secret is in the name, and Grand Slam Tennis is ALL about completing a Grand Slam, or for tennis noobs, winning all four major championships: The Australian Open, The French Open, Wimbledon, and The U.S. Open. To do this in Grand Slam Tennis you’ll begin your to-be illustrious career as many role-playing games do, as a lowly kid off the street vying to become a pro, and will quickly be thrown into the fray whether you’re ready or not.