The Madden series is now over 20 years old, and with Mr. John Madden himself stepping down from playcalling, could this be the end of an era?

Of course not, the man has nothing to do with the video game.‚  EA Tiburon handles development duties and my oh my does the Wii version look alluring for the 2010 season.

Bolstered by a new “Madden Showdown” mode, NFL ’10 is first and foremost a stylized beast. EA did not go for realism with 2010 and call me crazy, but I love the approach, and maybe you do too.

Madden Showdown is broken down into 3 major components–Game Changers, Prediction System, and Spotlight Moments, each with their respective abilities that you’ll learn to love, or grow to hate.

“Game Changers” is a mode built upon a variety of customizable options, 8 in total. The eight modes within the Showdown include some pretty hilarious scenarios including “Fumblitis” where all players grow butterfingers, “Invisibility,” I think you understand that one, “It’s Alive,” where the whistle never blows, and a few more. 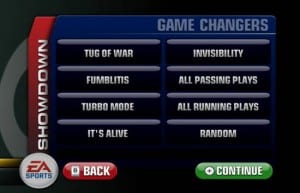 The “Prediction System” is what I’ve been begging for for years. Basically, the prediction system allows gamers to place wagers on different categories in their game including the winner of said game and one of many secondary guesses focused on plays during the game including “longest pass,” longest run,” etc. 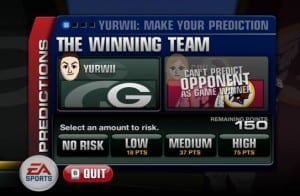 And finally, “Spotlight Moments” are those times when the already pulsing drama of the game just isn’t enough. During these “critical situations” as EA puts it, the cameras will focus in on the ball and‚  a mini-mini game will take place on-screen that looks to be simply a button-masher. 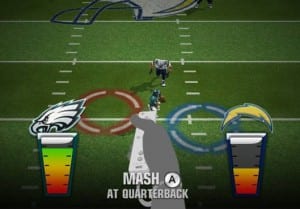 However you cut it, EA is giving us plenty of reason to at least ponder the thought of purchasing NFL ’10 on Wii instead of its HD brothers.