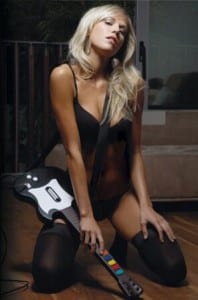 Studies show that an attractive woman increases traffic by 12,783%, even if she is only tangentially related to the original content.

Because Guitar Hero: Smash Hits is just a re-release of previous tracks, I didn’t really feel it deserved its own review.‚  If you are interested in purchasing it, check the track list beforehand – Some songs are re-used from the Aerosmith, World Tour and GH3, so there might not be enough new content to make it worth your while.

That being said, I enjoyed it, since I am a relatively new convert to the whole Guitar Hero scene.‚ ‚ ‚  I still can’t use all five buttons, so I’m not good enough to be mocked on South Park, but there is something oddly hypnotic and fun about the whole concept.

Playing did make me create my own “wish list” of songs and features for future installments, though.‚  As a note, I tried not to include any songs that have been confirmed for future games, or use artists – Van Halen, The Beatles – who have their own games in production.‚  If I did mess up somewhere, feel free to e-mail me or to point it out in the comments.‚  In no particular order:

– “Your Love” by Outfield.‚  Along the lines of “Don’t Stop Believing” by Journey, this is a strong karoake number that would translate well to Guitar Hero or Rock Band.‚  As an added bonus, it is from 1986, giving it retro points.‚  Covers are not acceptable, unless a bosom-y avatar for Katy Perry’s version, “Use Your Love,” is used.

– Anything by Pink Floyd or Led Zeppelin, but especially “Wish You Were Here” or “Comfortably Numb” or “Kashmir“.‚  Although there is hope that Pink Floyd will eventually get their own game, it hasn’t happened yet, and the talks are at such preliminary stages that I feel find settling for a song or two.‚  I nominated “Wish You Were Here” even though it is such a sparse song because of its haunting vocals, and the guitar solo in “Comfortably Numb” is a natural for Guitar Hero or Rock Band treatment.‚  According to the scuttlebutt on Wikipedia, concerns about the quality of the original masters and royalty payments to the bands have caused the hold-up for both.

– More noteworthy live tracks.‚  Pretty much anything from Cheap Trick’s Live at Budokan would apply here; “Surrender” was in Guitar Hero 2, but it is scandalous that “I Want You To Want Me” also hasn’t gotten the digital treatment yet.‚  Similar to Cheap Trick, anything from Nirvana’s Unplugged album would be great, although a bit somber for a GH/RB game.‚  An “acoustic” game in general might be a good idea.

– More difficulty sliders.‚  In sports games like Madden and NBA Live, you can specify whether certain penalties and fouls will be called, or dumb down certain aspects of the computer AI.‚  Likewise, I’d like if I could play these rhythm games at the higher difficulties, but limit the songs to four fingers.‚  For example, there is a big jump in difficult in Rock Band 2 from the normal to hard difficulty.‚  Why not give the option of normal with more notes to hit, as opposed to jumping straight to the five-fingered hard?

So, you’ve heard my half-baked ideas.‚  What are some of yours?