Icarus Studio’s new title, Fallen Earth, is set to bring an exciting new twist on the massively-multiplayer online role-playing game genre, taking place at a post-apocalyptic Grand Canyon and drawing from both the RPG and first-person shooter genres. The Fallen Earth universe takes place in the year 2156, after the deadly Shiva Virus has wiped out almost all of the human population and nuclear war has left the Earth as nothing but a desolate wasteland. Of the humans who survived, there are now six factions that dominate the region “" some allied with each other, but many at war. You have the option of aligning yourself with the faction of your choice, at the cost of being attacked on sight by rival factions.

Many unique features are available in this new title, ranging from special abilities to offensive and defensive mutations to exotic weaponry, and I was lucky enough to experience these by gaining access to the game’s closed beta event.

Once the game loaded I was presented with the character creation screen (the beta client lacked an opening cinematic), which is by far one of the most detailed character creation systems I have seen. First you select a sex and name for your character (you also have the option of creating a last name if you so choose), and then are able to manipulate your character’s features in a multitude of ways.

There are twenty-five face shapes alone to choose from, and then you have the option of make you character look progressively older, from a youthful teen to a wrinkly, grandfatherly figure. A large variety of skin tones and hair styles, from liberty spikes to a comb-over, are available as well. The feature I liked most here was the ability to add multiple piercings to the ears, eyebrows, and even the tongue, as well as a variety of tattoos and body paintings to the face. The rest of the body didn’t have as much in-depth customization, which really isn’t a shame since it will be covered in an assortment of armor anyways. However, you do have the option of additional tattoos on the arms and legs, as well as choosing the character’s t-shirt and sneaker styles.

The user interface is pretty advanced and very user friendly. Almost every window you open has the ability to be resized, dragged to another location, and have its opacity changed. At start, the chat box is fairly large, but it is fairly customizable so this provided me an excuse to play with it. The top left of the screen provides information regarding your character: your name, health, stamina, and gamma (used for mutation skills), and experience bar. The top right shows your mini-map, which shows quest icons, non-player characters, gathering locations and an interesting little perk “" a meter that measures the volume of sound you are producing, to help you be stealthy. The action bar is pretty customizable as well. You can elongate it as well as create multiple bars and key-map each of them; however, as of this time you are unable to separate the bars from each other. 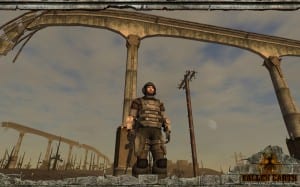 You play your character in Fallen Earth mainly in third-person view, including combat, though you do have the option to switch to first-person. This is typical of most RPGs, however, combat draws from the FPS genre and uses a circular reticle “" the first feature I didn’t like. When wielding melee weapons this seems to fit “" no problems so far. Though as soon as you use ranged weapons (for example, your starting crossbow or zipguns) combat gets a little aggravating. I am not at all used to playing an FPS game from the third-person view, so part of this has to do with my gaming history, but it was simply difficult and “clunky.” It’s possible to switch back and forth between views between fights, but this is more of an annoyance than anything. Certain weapons do offer the chance to look down the sights, such as scoped rifles, and this efficiently eliminates the problem.

Though at first this is a minor annoyance, you do get used to it and are able to appreciate the unique qualities of the combat and weapon systems. The types of weapons available to your character are vast, ranging from wooden planks to swords to sub-machine guns and sniper rifles. Many weapons also offer the chance to further customize them, and all of them eventually take durability damage and must be fixed. All of these weapons are able to be crafted and maintained by the player through trade skills, which I will explain in more depth later on, or bought from others. 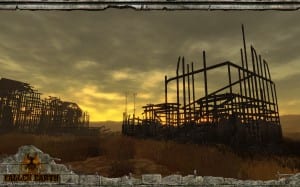 One of my favorite aspects of the game is the ability to equip not one, but six weapons at once! You have six weapon slots to fill up, which you can cycle through at any point, from the two-handed weapon slot over your back to fitting pistols on either side of your hip. There is nothing like shooting a giant spider with a crossbow and then running up and whacking the bug with a two-by-four. You are able to cycle through weapons by holding the Control key and either pressing the corresponding slot number (1 through 6) or by scrolling your mouse wheel. During the beta test, however, there seemed to be a glitch that would pop up from time to time when using the mouse wheel to select the weapons.

Similar to the advanced weapon selection is the gear selection, which boasts the ability to fill 19 armor slots. There is an incredible variety of armor in Fallen Earth, starting with cargo pants and bandanas, but eventually you’ll find old Kevlar and be able to craft top-end protective equipment. Each piece of gear protects against vulnerabilities to certain types of incoming damage, but no one set protects against everything, so multiple pieces of gear will be needed for different situations. During my testing I was able to craft myself a nice set of starting gear, donning some cargo shorts, a bandana, and some black fingerless gloves “" the regular, post-apocalyptic bandit!