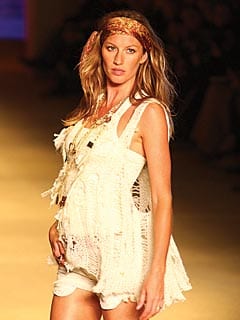 Watch out Shiloh and Suri – this is going to be one attractive kid.

According to People.com, the 29-year old supermodel and her brand new husband, Patriots Quarterback Tom Brady, are expecting a little one sometime early next year. ‚ The all-star couple only got married three months ago, and pregnancy rumors have been flying ever since she and Brady were seen leaving an obstetrician’s office together last month.

Both Brady and Bundchen camps are staying silent about the rumors, but anonymous sources have told People that Bundchen is “ecstatic” about the baby on the way. ‚ Brady, however, who already has a son with ex-girlfriend Bridget Moynahan, said on May 28th that “One is enough. ‚ I have dogs, that’s all I need.”