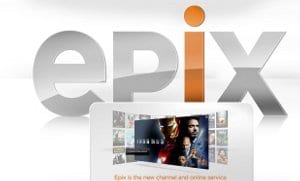 Consumers have more choices than ever for watching movies these days. Once they’ve left the theater, you can stream them on-demand from cable providers, grab a flick from Hulu, or stream them from Netflix’s Instant Watching. And yet, we’re about to get another choice: Epix.

As opposed to all the choices offered now, you can only watch older free movies from the limited catalogs, or you’ll have to pay to watch newer ones on demand. Epix will offer movies during this pay-for window, but you won’t have to pay for them directly. Instead, the joint venture of Lionsgate, Paramount, and MGM Studios will package their content, and sell it to cable providers who in turn will add a channel to the standard line up. As an added bonus, the content will also be available online for streaming in all of it its 720p HD glory. 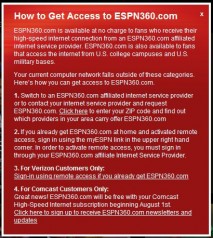 Warning viewers receive if their cable provider does not offer access to ESPN 360.

If Epix gets their way, you won’t pay any fees to take advantage of this, and you won’t have to watch any advertising either. These costs for the operation will be recuperated by requiring users to subscribe to both the cable providers’ TV and Internet services. This is similar to the deal that ESPN has inked with some providers to allow streaming of live sports events via ESPN 360. It works like this: if your cable provider pays for access, you can watch all you want. If they don’t, there’s essentially nothing you can do, other than beg and plead with your cable provider to purchase it. Deals like this never sell content directly to the end user.

Epix has yet to announce its cable partners, so one has to wonder if they have any or will even be able to get them. It would be sad for this venture not to get off the ground, because it’s certainly promising. Epix is currently in a private only beta, though you can follow them on Twitter to try and gain access.