Swords & Soldiers is almost too good to be a WiiWare game, showing a great level of charm and a fun factor it shares with the best of its counterparts, Tetris Party and Bomberman Blast, which are primarily based on “real” console predecessors.‚  Although there is a lack of information that can lead to frustration at times, for $10 some amazing value is provided.

Around the web, I’ve seen Swords & Soldiers described as a side-scrolling real-time strategy game, but I’d argue that the better term would be as a tower offense game.‚  True, you harvest gold, farm mana and pay for upgrades, but the majority of the game involves buying units that march from left to right, defeating anything in their way or being defeated themselves.‚  Like a tower defense game, you do not control your units, but rather try to build up waves that will eventually overrun your opponent.‚  Unlike a tower defense, your side is almost always the one on the offensive, sending waves to conquer your opponent’s base.

In terms of personality and just general gameplay, Swords & Soldiers reminds me of a more offense-orientated Ninjatown, an enchanting tower defense game for the DS.‚  You control one of three factions: the Vikings, the Aztecs and the Chinese.‚  All are caricatures, as the Vikings are obsessed with having the best BBQ ever, the Aztecs growing the greatest hot pepper, and the Chinese ruler must have the latest toys, even as the expense of his empire.‚  The dialogue is snappy and has a fun sort of brevity to it, regardless of what side is being played. 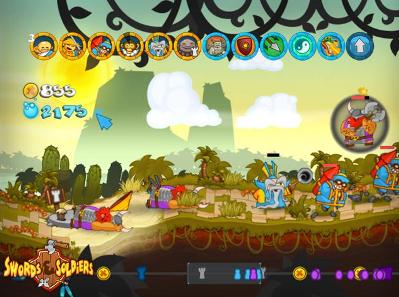 The actual gameplay, well, it’s so simple that I pretty much already summarized it.‚  Taking full advantage of the Wii Remote, all the actions your faction can do – building units, upgrading, casting spells – are accessible from a single screen.‚  What little menus the game features expand from a bar at the top of the screen, and there is almost no text except for the dialogue screens between stages and short bursts of text from characters.

If anything, there is a lack of information in Swords & Soldiers that can be frustrating at times.‚  For example, in a normal RTS or tower defense game, you would be able to see each character’s max hit point level, and attack and defensive ratings.‚  As far as I can tell, this is kept intentionally vague in Swords & Soldiers.‚  I know that the big, brutish golems of the Aztecs obviously have more strength and hit points than the archer-like dart shooters, but how do they compare to jaguar warriors?‚  Outside of trial and error, it’s hard to tell the “best” units for each faction. 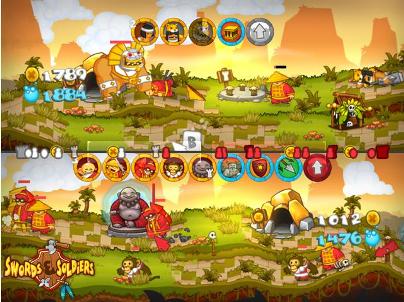 This is a somewhat minor quibble though, more of a complaint about not being able to see how the sausage is made.‚  Most of Swords & Soldiers’ 30 campaign stages, 10 for each faction, are balanced well and allow you to get a feel for the strengths and weaknesses of each.‚  Generally, the first five or six stages of each campaign introduce you to the units you’ll use and suggest tactics, and the final couple of stages are maddeningly difficult.‚  In particular, the last two Aztec missions took me more than an hour each to beat.

However, the colorful graphics, good animation and robust sound effects keep things fresh, even if you’re trying for the fifth time to beat a specific stage.‚  Swords and Soldiers looks crisp, like the best of 1990s Saturday morning animation; the art style is reminiscent of SNES and Genesis puzzler The Lost Vikings.‚  All the characters have their own sound effects, and the leader of your faction barks out orders as units spawn and confront enemies.

For $10, Swords & Soldiers simply can’t be passed up.‚  The few frustrating aspects, like the lack of stats for units, are more than made up for by the great graphics, gameplay and personality throughout.‚  If I could offer one suggestion though for Ronimo Games’ sequel or next effort- This game NEEDS online multiplayer!‚  With that, Swords & Soldiers would be ridiculously awesome.‚  As is, it is still one of the most vibrant and original games released for the Wii, nevermind WiiWare.

Swords & Soldiers is available exclusively on WiiWare for 1000 Nintendo Points