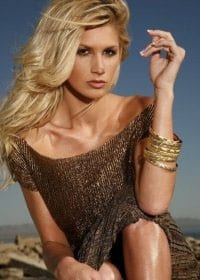 Paris Hilton threw a fit, along with some fruit and ice, at Texas beauty queen Kendhal Beal in a Los Angeles nightclub on Tuesday night.

A spokesperson for Beal told the New York Post’s Page Six that when Hilton heard then-boyfriend Doug Reinhardt was at the Darkroom partying with another girl, she showed up and flipped out. According to her rep, Beal was not only at the club with Reinhardt, but with on-and-off boyfriend Brody Jenner, and had done nothing more than talk and watch the Lakers game.

“Paris was picking up ice and fruit and throwing it at Kendhal — she was the victim” the rep told Page Six. “Kendhal did nothing offensive or aggressive. Paris was throwing accusations, calling her names. It was the same thing you always hear about Paris and her tirades.”

A rep for Hilton, on the other hand, said that the story is being “greatly exaggerated” and that she had only argued with Reinhardt.

Not surprisingly, Page Six also reported that Hilton and Reinhardt immediately broke-up. Hilton, never skipping a beat, was seen out the next night having a go at soccer star Cristiano Ronaldo. Other club-goers were quick to tell reporters that Ronaldo was impervious to her aggressive flirting.

Hopefully, public rejection has taken the self-absorbed heiress down a peg, and for that, Ronaldo, we thank you.