Movies about women using their bodies to further themselves is so out: now Hollywood has a new obsession men using sex for gain. We aren’t talking Rob Schneider as Deuce Bigalo, but full-on, no other place to turn, male prostitution.

HBO has its new series “Hung” (exactly what it sounds like) set to debut June 28, and now Ashton Kutcher is getting in on the male action with his new film “Spread,” which hits theaters in limited release August 14.

The Twitter king, Nikon spokesperson and Demi Moore hubby known for his comedic roles in “That ’70s Show” and “What Happens in Vegas” is switching his tune for “Spread,” where he plays a “sexual grifter” who knows what he’s got and uses it to get in with the richest ladies in Los Angeles and enjoy their luxurious lifestyle. 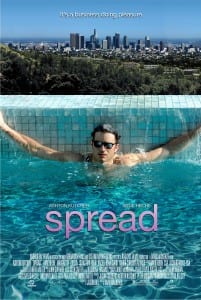 Things start getting good for Kutcher’s Nikki when he becomes involved with an attractive lawyer named Samantha (Anne Heche) who gives him everything he could ask for. But meeting a waitress named Heather (Margarita Levieva) who ends up being in the same business as he sends his life awry when he has to decide whether he is happy in the life he is living or would rather find something real living on his own.

A leaked trailer that can be found on YouTube gives “Spread” the feel of a cute, romantic dramedy, but it will be interesting to see how far director David Mackenzie will go with the sex aspect: will Kutcher be more like Owen Wilson and Vince Vaughn’s playboy weddding crashers or a kept Los Angeles sex pet.

What do you think of this new trend in Hollywood? Are you interested in Kutcher’s new film? Tell us what you think below!