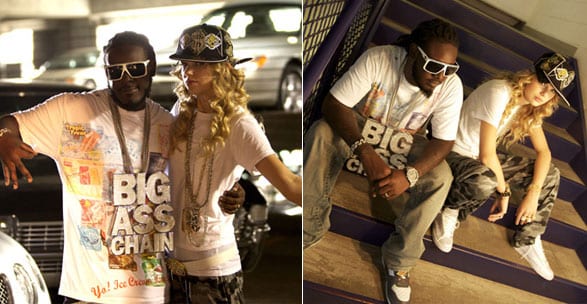 Country music’s favorite teenaged sweetheart has recently changed her tune, according to JustJared.com.

Taylor Swift’s fans would be surprised to find that Swift was rehearsing Tuesday night for the CMT Music Awards with none other than rapper T-Pain. ‚ In fact, 19-year old Swift tweeted to her fans, “If I said I was in the studio with T-Pain, would you believe me?”

Well, believe it, country fans. ‚ It’s‚ still a mystery as to what the two stars are going to sing together, but according to the MTVNewsroom, the duet is set to take place during the show’s opening segment. ‚ For now, fans will just have to be satisfied with the photos taken during the rehearsal, showing the cheery blonde Swift weighed down with chains and bling, giving us her best Zoolander face and throwing up gangster signs next to T-Pain.

Swift recently said that she would like to do a duet with rapper Lil’ Wayne, comparing it to the duet between Nelly and presumably her favorite artist, Tim McGraw.

The CMT Music Awards air this Tuesday at 8PM on CMT.