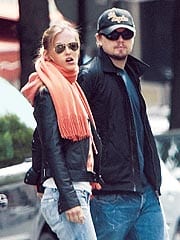 It’s no secret that Leonardo DiCaprio loves supermodels. He’s been linked with Eva Herzigova, Amber Valetta and Gisele Bunchen. It’s also no secret that their superstar relationships don’t work out.

According to People.com, his latest beauty, 23-year-old Israeli-born Sports Illustrated swimsuit model Bar Refaeli, has apparently given him a scare with talk of settling down. An unnamed friend of the former pair told People, “She wanted to move faster than he did, she wanted to move in together, so he broke it off.”

This isn’t the first time the 34-year-old actor has gotten cold feet. DiCaprio and Refaeli have been seeing each other on and off since 2006, and were even briefly engaged.

In recent weeks, DiCaprio was spotted chatting up another girl at a bar, and Refaeli attended the Young Hollywood awards alone. However, sources also told People that the split isn’t necessarily final.

If it doesn’t work out, another supermodel is sure to catch Leo-Mania.