It’s fitting that I’m torn about my feelings for inFAMOUS, given the dual-nature of the storyline. While Cole, the protagonist of inFAMOUS, has the choice between actions that represent both good and bad, there were times when I could not get over how good inFAMOUS was, and other times “" albeit fewer of them than good “" where I was shocked at how poorly crafted certain aspects of the game were. What we end up with, to put it succinctly, is a flawed, but very rewarding sandbox superhero game.

Cole is a courier sent to deliver a package that ends up exploding in his hands as he brings it to where it needs to go. The blast blows a crater into one of the three islands of Empire City and knocks out the power over the entirety of the metropolis. Cole discovers that because of the blast, and the object that exploded “" something we later learn is called a Ray Sphere “" he has gained dominion over electricity (and though it isn’t mentioned, electromagnetism as well, based on some of the powers he possesses). These new powers allow him to blast bolts of lightning out of his hands, throw electric grenades, shoot exploding electric rockets, grind rails and wires, and float, among many other electricity-based skills.

The FBI takes notice of Cole’s new-found abilities, and tasks him with recovering the Ray Sphere before it falls into the wrong hands “" since he did cause the explosion, he doesn’t have much of a choice, especially since the alternative is for the entire city to be turned into the military’s personal playground. You are also sent to restore power to the city to make your life easier, as well as improve Empire City’s situation “" each section restored earns you a new power for use in your battle to recover the Ray Sphere. 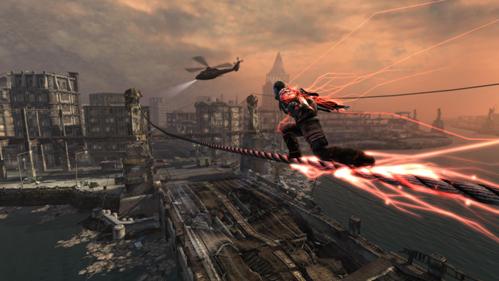 That’s the story in a nutshell, as I’m not about to divulge spoilers for you in this review, but you do get a say in how the story progresses, to a degree. That’s because you can play as Evil Cole or Heroic Cole, based on your actions. Important NPC’s will treat you differently, depending on which direction you take “" Cole is trying to repair his relationship with his ex-girlfriend, Trish, and she is going to have a hard time respecting you if you’re killing innocent people because it makes you giggle. The citizenry will also act differently towards you, depending on your alignment; if you’re good and have helped them, they come to your aid in battle, punching, kicking and chucking rocks at enemies that are focused on you. But if you’ve been a naughty Cole, they’re just as likely to toss those rocks at your face.

The Karma system has its issues, but overall it works. You can’t be neutral in this game and still be powerful, as there are powers specific to good and evil “" the good ones are easily controlled, so that you don’t cause needless destruction, while the bad ones are more likely to level everyone in a city block, regardless of who they are or if they needed to be wiped out. Of more concern to me is the fact that when you get to a certain level of good or evil, you can just make whatever choices you want, because you’ve got enough leeway in your Karma to allow for it. This is helpful in particularly difficult battles when you just want to rattle off a stream of explosive electrical rockets, but makes Cole look like a sellout if you choose an evil path after playing 80% of the story as a champion of the people “" especially since your Karma level is still high enough that people will treat you as they did prior to your most recent decision. It’s not that the system is broken, it’s just that the penalties for going against your alignment should be much more severe, in order to make you work for the side you want to fight for. It doesn’t help either that the incentive to be bad just isn’t there “" the game is more difficult if you play as a good Cole, and most of the moral choices are pretty cut and dry: should I help these people, or should I act like an old-school, stereotypical cartoon villain and do evil things just because? I mean, why else would I have grown this clearly evil facial hair? That’s not to say that all of the moral choices are like this, but as I said, the game does not usually provide you with choices that actually make you sit and think on the decision any longer than it takes you to read the options.