The Battle Rifle is without a doubt the signature weapon in the Halo franchise. Its awesome power as an unrelenting force to quickly and effectively slay enemies is the reason I am attracted to Halo. With what other weapon can I hone my mid to long range rifling skills with tightly wrapped sequences of not one but three emitted sprays of bullets at once? 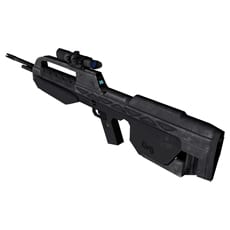 So it comes as a true surprise that Halo creator Bungie Studios revealed that the Battle Rifle will not be featured in ODST’s campaign or newly revealed FireFight mode.

Quoting the weekly Bungie update where all things Halo E3 announcements were talked about:

“Halo 3: ODST’s campaign and Firefight modes don’t feature the Battle Rifle. I’d tell you to blame Luke, but don’t worry, once you get your hands on the automag, you’ll forget all about your precious BR. And of course the traditional Halo 3 multiplayer, which you’ll remember from earlier in our conversation, is found on the second disc packed in with Halo 3: ODST, doesn’t make a single feature change to Halo 3’s multiplayer. If you want to four-shot some scrubs, you’re only ever a disc swap away.”

There we have it. We already knew ODST’s online play is simply an addition of three new multiplayer maps and will of course make use of the BR, but the comfort and familiarity of said weapon is one that I personally will have to slowly wean myself off of before ODST arrives Spetember 22.

This week’s Bungie Update is an interesting read and one that highlights a number of issues that you’d do well to check out.