With the success of music controllers such as Rock Band and Guitar Hero, it’s no surprise that sports would start to get in on the peripheral action. Activision has decided to work with Tony Hawk to create a skateboard controller for the latest game from the skateboarding deity. The controller looks like a slightly thicker skateboard with no wheels. It uses accelerometers to determine the position of the board compared to the ground, and infrared sensors on each side, the front and back. The accelerometers detect when you turn the board or when you lift the front or back. The IR sensors detect when you move your foot next to the board, such as when you kick. These sensors can detect all the motions in the game, so there is no need for a regular controller. 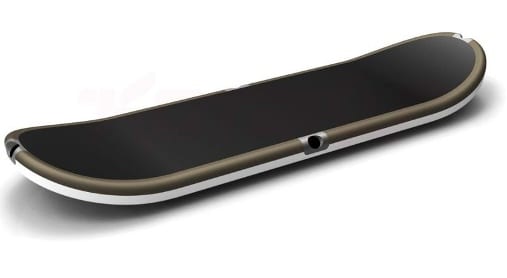 The controller feels a little strange at first; the board is kind of rounded on the bottom allowing it to tilt left and right, which you don’t get just from standing on a real skateboard. You can jump the skateboard by quickly moving the skateboard’s front upward. While the skateboard is in the air, you can tilt the board left or right to flip it in flight. The “Ride” as this new controller is called, can do everything a traditional controller was able to do, mostly because the controls are context sensitive. The‚ accelerometers will even detect if the Ride has been spun around. This allows you to even do 180s and 360s.

In the demo they showed off, the player has to kick beside the board to get started, then lean forward and backwards to direct the board down the path. The game will then ask you to do a “manual,” which is raising the front of the board slightly; all I had to do was lean on the back of the board a little. Then it goes up a ramp, and you need to get the board to jump. This was accomplished by pressing on the back a bit to make it go up at just the right spot. After that you ride by a railing that you can jump up onto; like the earlier jump, just pushing on the back will launch you into the air and balance you on the rail. This part really is cool for the new controller, since you need to actually balance by leaning, rather than using an analog stick or button presses.

This looks like it’ll be another good example of getting up and truly interacting with a game. I like how you don’t have to ever pick up the regular controller at all once you start, much like in the aforementioned music titles. To go through the menu you can just move the Skate board around to navigate it. If the game is as good as it looked from the five minute demo, and offers enough of a challenge, and enough variance, this should help revitalize the Tony Hawk game brand.