If you took a look at my desk you might think I’m more into action figures than video games. But if you look closer you’d see that said action figures and other oddities are tied to my favorite video game franchises. I’ve got a couple of Pip Boys from the Fallout series, a Marcus Fenix little dude, and a mini Halo-themed Battle Rifle just to name very few.

But why am I telling you this? Probably because….

Microsoft and MacFarlane Toys have teamed up to release‚  an action figure in the name of “The Rookie” from Halo 3:ODST when the game launches September 22 and looks attractive to fans like myself, and collectors in general.

If you didn’t know, The Rookie is the main character in ODST and to me, with his silenced SMG and black finish, has quite an edge over the leaping Masterchief, at least in desk appeal.

Take a gander at the beautiful workmanship below. 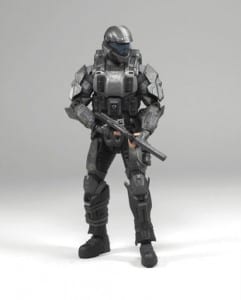