LOS ANGELES — Blast got to chat with the one and only Eliza Dushku, star of the new Bethesda Softworks action title Wet. Dushku plays Rubi Malone, a hard-drinking, acrobatic hit woman.

Let’s get this out of the way right now: Eliza Dushku is so cool. She gives a firm handshake. She talks to everyone around her, even the burly security guard. And she gets really into watching people play her game.

Anyways, on with the beans we got her to spill.

BLAST: Is this your first video game?

ELIZA DUSHKU: No. I was in Buffy and and then the Yakuza game.

BLAST: What do you think of Wet so far?

ED: I’m into it, and I have a friend that came down to test out the game. He’s 14. His name is Kyle. He says it’s really good and I trust him.

ED: Um. It depends. It’s just a whole different “" it’s you, but it’s not. It’s kind of like for this video game I didn’t do all the body muscle stuff. I knew she already sort of had a rhythm, and I felt in a way more like I was getting into her established character and trying to find the right fit, you know what I mean, to give her. 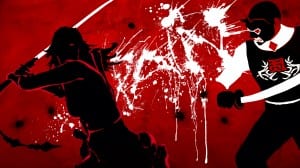 I actually decided that I should smoke a few cigarettes each time we did it. My friend was like “your voice is so low” and I was like “yeah that’s the cigarettes.” I quit smoking, but I was like “eh, it’s for work.”

BLAST: Have you had a chance to play through Wet and see yourself in action?

ED: Just a little bit. It’s awesome and I love, you know, that Tarantino, “Kill Bill” look to it “" the whole 70s, grainy, the music. I think it’s really sexy. It’s sexy and it’s exciting and she’s a real working class Lara Croft, Jack Daniels-confident, tough, hard as nails, she’s international. She’s in Hong Hong and the UK, and she’s going wherever she needs to go to take care of business.

BLAST: Actors oftentimes say they put a lot of themselves into their roles. Are you able to do that in a video game role?

ED: Yeah. Every time, you know, she’s crazy I got to get crazy and hit record. It was a great anger release. 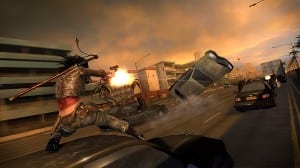 BLAST: Do you see yourself doing more video game roles now that you’ve got this one done?

ED: I was sort of holding off after the first two and then this one came to me. I like the idea of seeing this one sort of go farther and go deeper. I definitely feel a real identification with [the character].

BLAST: Did you play video games growing up?

ED: Not as much as I wanted to, because I was a little sister. I liked Metroid, and I liked Mortal Kombat, and I liked the Mario Bros.

BLAST: I want to talk about Dollhouse a bit. What was the most challenging thing about season one?

ED: Well if you asked me like three weeks ago I’d say the Friday night time slot. Because, you know, it’s Friday night, the people weren’t necessarily showing up and seeing it on their TVs on a Friday night, but then when they woke up we were the most DVR’d show in history or something.

I started realizing how many people were watching. Now it’s just kind of gravy that we get to go back and do anther season. We don’t have to worry sort of about what the numbers coming in on Friday are. We’re reaching our audience, you know?

BLAST: Does your producer role change your relationship with Joss Whedon at all?

ED: Yes. We’re so serious. We’re so business oriented there’s no fun and games anymore. (laughs) Not even. I think I’m going to go back and bring them all pizza. He just texted me last night and said “we’re officially en fuego.”

BLAST: What’s been your favorite imprint so far?

ED: I had a lot of fun playing the assassin. I fought FBI agent Ballard in, what was it, (episode) six, “Man on the Steet.” That’s also the episode where the show really picked up and found its voice. That was like a high episode.

It’s also cool in the end, “Omega” where I played like 38 personalities at once.

BLAST: Do you ever feel that the show is too risque?

BLAST: What are you looking forward to in season two?

BLAST: Is there someplace new you want to go with the show in season two?

ED: There’s a little bit less of the dumbed-down doll and a little more of this young woman now being able to figure out what she’s going to do.

BLAST: So you’re filming in Boston soon. Boston’s trying to become this like Hollywood East. Do you like filming at home with us becoming more of a hub of the entertainment industry?

ED: I love it. Boston’s my favorite place on earth.

Eliza said she’s filming a psychological drama in Boston with Ben Barnes based on what she called “a really beautiful script.”

She is also dating somebody. No, she didn’t say who, but the Boston Herald announced today it is ex-Celtic Rick Fox, and we’re pretty sure we caught a glimpse of him playing Wet before the interview.

She currently owns a Nintendo Wii and is addicted to BrickBreaker on her Blackberry.