There is a lot to love about Boom Blox Bash Party, starting with the fact that it’s a sequel to last year’s wonderful Boom Blox. Electronic Arts kept much of the game very similar to the original, holding on to core gameplay components, level design and game types, but at the same time they expanded upon all of that by introducing new concepts “" such as space and underwater levels “" as well as fattening up the entire product by adding more levels, more shapes, more tools, more of a focus on multiplayer, and more user-created goodness. This is how you do a sequel, especially if you’re going to do it so soon after the initial launch of‚  a franchise.

It’s tough to explain Boom Blox simply, given there are so many different game types within the game, but if you forced me too, I would tell you it’s a physics-based game where you knock down blocks (or blox, given the game) with a variety of throwable objects. It’s like reverse Jenga, with explosions and combos.

It’s more than just throwing baseballs and bowling balls though, as there are also virus balls that infect other blox to break them down, chemical blox that explode on contact with other chemical blox, vanishing blox that “" you guessed it “" vanish when you hit them, explosive blox, and even character blox, that you can use as part of the environment or as an outside-the-box way of solving the puzzle.

There are also levels where the point is not to knock as much down as you can, but instead to play it safe, Jenga style, only taking out your own colored blocks while trying to leave the structure intact. There are levels where you paint the blox with paint balls, in order to match colors and score points from combos. It’s amazing how much strategic destruction there is in this title, and how many different options you have at your disposal. 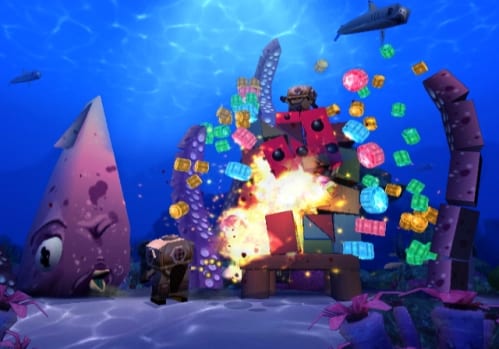 There were a few problems with the original that needed some work in the sequel, but it looks as if EA addressed them. The most glaring was that the multiplayer portion was much more fun than the single player, but the effort put into a vast array of multiplayer levels was nonexistent. This time around, EA has bulked up both the single and multiplayer levels “" there are around 400 of them “" so that you can play for hours and hours by yourself or with friends. The single player is actually deep enough “" and rewarding enough, thanks to the medal/achievement system in place “" that you could sit around just playing that with your friends, with everyone who isn’t holding a controller playing the role of backseat gamer until it’s their turn to show you how it’s done. The amount of replay value in this title, thanks to it’s deep single and multiplayer experiences along with the achievement and reward system, is staggering. 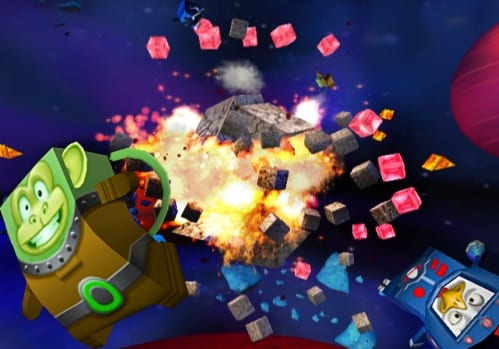 Don’t think that this is just Boom Blox 2: Now With More Levels, though. EA also created underwater levels where you are trying to make the blocks rise to the surface, as well as space levels where the laws of gravity come into play much differently than they do in standard, Earth-based levels. These are welcome additions to the franchise, and I love that EA did not just settle for more of the same. When you combine this with the new shapes and tools you need to take into account, it’s actually like a completely different game than the first, despite both being similar in so many ways.