There has not been any official word of Motion Plus being used in the sequel to No More Heroes, but there is nothing wrong with the idea of utilizing the new peripheral, given it is a sword fighting game that uses motion controls. Having your movements recognized in a 3D space would improve the accuracy of your gestures, even if your actual sword swings‚  (aside from finishers) have more to do with a button press than a swipe.

That’s why the very end of the E3 trailer for No More Heroes 2: Desperate Struggle caught my attention. Take a look at this screen grab: 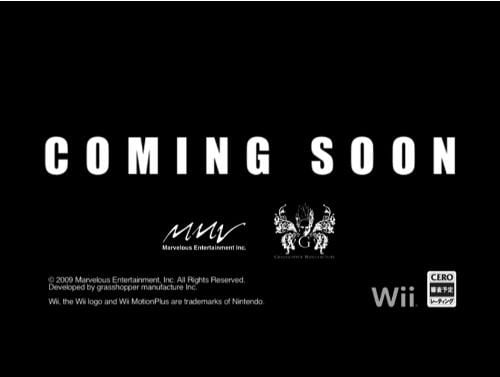 Down in the bottom left corner, you see a trademark for Nintendo that says, “Wii, The Wii logo and Wii MotionPlus are trademarks of Nintendo”. It wouldn’t make much sense to include the trademark if it wasn’t involved in the game, right? I don’t see a trademark for the Wii Zapper anywhere on this page…

Take a look at the trailer itself, via IGN. It’s embedded here, but click through for the widescreen version if you would like. I’m not sure what this means, but the IGN version does not include that final screen; that may have been some editing by them though, as other versions, such as Kotaku’s, have the screen.