It seems like just yesterday that Valve released their horrifyingly addictive Left 4 Dead first-person-shooter experience, but believe it or not, a sequel, announced this morning is alive, breathing, and on the way later this year for Xbox 360 and PC.

The game takes place this time around in the southern reaches of the United States, namely Savannah Georgia, in and around the bayou, and all the way to the painful ending in the French Quarter of New Orleans.

With Zoe and co. nowhere to be found in this sequel, what four zombie-killers will we have the opportunity, no, pleasure to play as this time around?

Valve didn’t drop any names just yet, but have a look at the poster below to see the group in their movie-poster style shot. 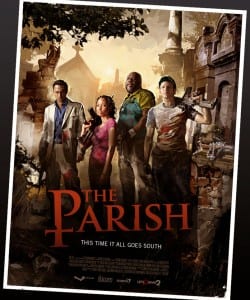 The guy on the very right bears a striking resemblance to the Scout from TF2, but could be just a coincidence, or plain wrong on my part.