Velvet Assassin is the new stealth game from SouthPeak Games, based loosely on the life of Violette Szabo, a French secret agent in World War 2. The strongest elements of the game involve stalking around in the shadows, stabbing Nazis in the back or face and switching the attractive protagonist in and out of various form-fitting outfits “" generally a pretty winning combination “" but offers little else to make the quality of the content match the strength of the concept. The writing is hammy, the story is not particularly compelling or well told, and the gameplay is drawn out and repetitive, all of which conspire to undermine the game’s purpose of getting the player to empathize with the historical figure at the center of the gameplay.

To be fair, historical gaming is a pretty unexplored genre. I know Call of Duty and Assassin’s Creed attach names and dates to their gameplay that are accurate at least according to Wikipedia, but at the end of the day, the history isn’t what’s at stake. You don’t play Assassin’s Creed to learn about the nuances of geopolitics in the Holy Land during the Crusades, you play it to knife suckers in the back. Given this, the fact that SouthPeak is using Szabo’s life as a selling point for the game (it’s on the back of the box and everything) is a bold marketing move that will, ideally, open up a dialogue about the merits of interactive media in more highbrow contexts in the future. If Velvet Assassin had been executed perfectly, which, sad to say, it wasn’t, it could have been a high-minded, almost literary game, and I would like to commend SouthPeak and Replay Studios for taking a step in that direction.

Velvet Assassin has problems, but it does have some solid elements. The meat of the gameplay involves sneaking undetected between areas of light and shadow, and the cinematography is striking and organic. Twilight, moonlight and harsh floodlights cast plenty of natural looking shadows for you to stalk around in and hunt patrolling Nazis. The game does a good job of emphasizing the stealth gameplay over any shooter elements, making the form of gameplay fit well to the spirit of the story. You have a silenced Colt pistol for most of the game but it’s very little match for the German guns, and if you get spotted, you really have to work to get yourself back into seclusion unharmed, so you can’t just charge into a room guns-blazing with any realistic hope for success. Stealth take-downs are infinitely more satisfying anyway. 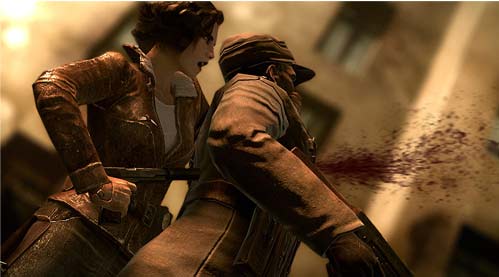 The gameplay takes place within the fevered dreams of a bed-ridden Violette, recalling her missions while laid-up in a French hospital. This allows for an in-game power called “Morphine Mode” in which Violette doses herself with morphine, the Nazis freeze in time, and you can reposition yourself “" or kill a guard “" as you see fit. This isn’t a necessary component of the game, and really just an out for when you get spotted so you don’t necessarily get gunned down the first time. Also when in morphine mode, Violette’s costume changes to a scant night gown, which is as good a reason for a not-completely-believable video game gimmick as I’ve ever heard, and while it’s a fairly interesting facet of gameplay, it feels tacked on and is a little strange.

The controls are pretty simple, which makes for a very quick learning curve, but also makes most of the movement and standard assassination maneuvers pretty repetitive. You can drop into a crouch, which secludes Violette in the shadows and quiets her footsteps, allowing her to get right up behind the unsuspecting Nazi guards and take them out silently; provided none of his buddies are watching. There is some variation, like shooting explosive barrels or activating a patrolling guard’s grenade so that he will walk the active grenade over to another group of soldiers, but for the most part there’s a typical sneak-and-stab drill that it doesn’t take long to get good at, and then bored with. Don’t get me wrong, it can be incredibly entertaining and satisfying to deftly pull off a silent Nazi assassination “" my encounters with the first few groups of guards in the training level left my heart racing “" but the Nazi AI, while deadly enough once you’ve been spotted, is unrealistically stupid. 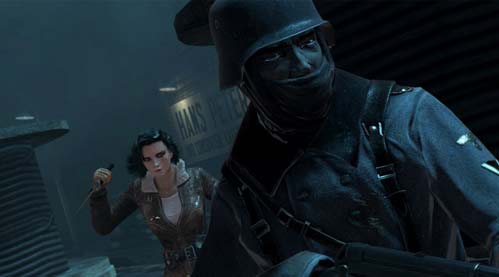 After sitting and watching a guy walk the same 20-foot stretch of hallway indefinitely without seeing the leather-clad British lady in the shadows at his feet, your enemies resemble less the ruthless soldiers of Call of Duty and more the moving platforms of Portal, where all that mattered was the right timing in a specific sequence to get from point A to point B. The game is pretty linear, so after you’ve got the movements of the next series of guards memorized you can just blow through them in less than half the time it took you on the first try, and if you’re on your second or third run through of a series of guards, the suspense of the game disappears completely and you’re just going through the motions for the hell of it.

While a compelling narrative might have seriously bolstered the repetitive gameplay, the game’s presentation of the story was very disappointing. There were definitely good elements to the story “" the character of Violette, Nazi antagonists, heartfelt letters home from Nazi soldiers you just assassinated “" but the presentation is so awkward and at odds with the rest of the structure of the game that it really detracts from the game more than it adds to it. All of the information about the story is conveyed via Violette’s not-particularly-well-voice-acted narration and occasional feverish hallucinations, but there isn’t really anything like cinematics, or character development, or any real connection between the player and the characters “" a real shame considering this is supposed to be based on real events and people. The story is certainly present if you care to piece it all together, but really, when you’re crouched in the dark waiting to stab your next Nazi, your motives or mission objectives won’t have any more or less meaning if you watched the story scenes or just skipped over them.

In the end, Velvet Assassin puts forth some solid, though occasionally mediocre, gameplay, that will appeal to stealth fans looking for some straight-up sneaking around. The story behind the game and the association with Violette Szabo, though selling points in the game’s advertising, are not its strength, so if that’s what you were looking for, try something else. At full price, with the low replay value, I wouldn’t recommend Velvet Assassin for purchase, but it wouldn’t be bad in your Gamefly queue.

Velvet Assassin is available for Xbox 360 and Windows and retails for $59.99