Today, Microsoft confirmed the existence of the Zune HD, which had been rumored for weeks now. 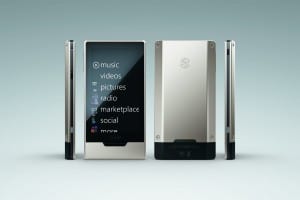 While details for the device aren’t plentiful, we do know that the device will have an integrated HD radio receiver, a 480 x 272 pixel OLED multi-touch screen, and is Wi-Fi enabled with a web browser optimized for multi-touch browsing. But perhaps the biggest announcement is that the device will integrate with the Xbox Marketplace, allowing users to transfer items purchased there to and from their devices.

Looks-wise, the Zune HD is clearly going after the iPod touch, and now that users can transfer files between the Xbox Marketplace and a device, Microsoft has the Sony PSP arrangement in its sights too. While we may have wanted to count the Zune as a has been, it’s still fighting to stay alive. We’ll have more next week from the E3 convention when we can (hopefully) get our hands on one.