An updated product detail page on the GameStop website and a source within the company revealed a lofty $119 price tag for the soon to be “revolutionary” skateboarding game.

We’ve learned a bit about the plastic peripheral, even from the man himself in the past weeks since the games’ official announcement on May 15 and we guessed at a price range between $80-$100, given the skateboards’ technological capabilities, but Activision clearly has other plans.

The peripheral allows for total on-screen control of your skateboarding avatar in the new game through multiple motion sensors and pressure pads of sorts,‚  weighing in at 3.5 pounds, and decked out in a slick black style, we were not expecting the rig to come cheap, but $120 is a little more than I, and maybe you,‚  can stomach at the moment, even if the game “changes skateboarding games forever.” 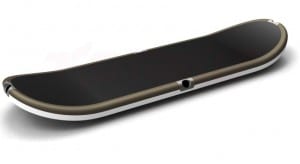 That said, however, Guitar Hero and Rock Band bundles sell like hotcakes, and with the millions of gamers behind the Tony Hawk name; the market is clearly alive and breathing cash in pocket who wish to see the new face of skateboarding.

Personally, I have bought and played every Tony Hawk console title (except Downhill Jam) and will definitely play RIDE at some time, but maybe when gas prices calm down a bit.