In what can only be assumed to be an effort to distance themselves from the crowded E3 announcement environment next week, High Voltage smartly dropped details on their new project today.

In an exclusive interview with gaming site IGN, The Conduit developers explained their title, stating that Gladiator A.D. will be ultra-gory, inspired by the vicious “300” motion picture.

In A.D. you’ll play as one of many gladiators, each with a distinct narrative, appearance, and range of abilities in a strategic fighting environment centered around the Roman Gladitorial Circuit in all of its bloody awesomeness. 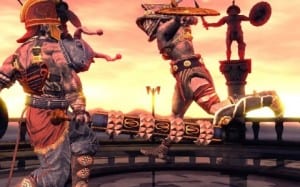 "This is Sparta!" sorta

In another smooth call from High Voltage, A.D. will make total use of the Wii MotionPlus accessory due out next month, and is likely to become the standard for Wii games of this genre as we move forward.

If there was one general theme related to readers in the exquisite IGN interview, it was that of total brutality and heinous violence, but what would you expect, it’s a gladiator game, do you know what those dudes went through?

Head on over to IGN to read the entire interview and catch an early look at the art style for the title. Furthermore, High Voltage has promised a second game revelation coming sometime today. As always, when we know, you’ll know.