CAMBRIDGE — On May 16, in the atrium of the Massachusetts Institute of Technology’s Media Laboratory, a small group of MIT administrators and professors gathered around Max Winkler, who was demonstrating a new Internet game he had programmed. It would be a somewhat familiar sight at the school “" except for the fact that the programmer is seven years old. 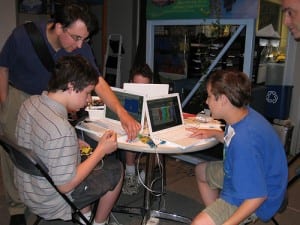 Winkler is an acolyte of Scratch, a simple programming language designed for children by a group at MIT. The free, open-source language was launched two years ago, allowing people of all ages to make digital music, greeting cards and invitations, animation and other media.

Over 200 “scratchers” (and their parents) met May 16 at MIT for Scratch Day, a meet-up event and workshop. Participants got to connect with people they had met online but not in real life, and collaborate on projects. Five boys at one table in the atrium had synced their computers to send a cartoon cat (Scratch’s mascot) bouncing and running from one computer to the other.

“I think it gives kids a voice in a realm that they’re not used to being heard in” said Stephanie Gayle, an administrative assistant with Lifelong Kindergarten, the group that created Scratch. “They can do incredible things with it, and it lends an opportunity for kids to become teachers to other kids.”

Gayle said that there were 118 Scratch Day events being held in 43 countries, demonstrating Scratch’s universal appeal. 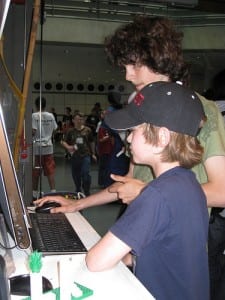 “We finally got a Scratch Day in Africa” she said proudly, pointing to a world map on her computer. “We have many scratchers in Africa, but it’s difficult to create a meet-up because of infrastructure problems.”

The Scratch team launched a web site two years ago where participants can post their creations and connect with other fans. Team leader Mitchel Resnick said more than 400,000 projects have been posted to the Website, and hopes that educators start to use Scratch in the classroom. He cited many benefits to childhood cognition, including thinking creatively, systematic reasoning, and working collaboratively.

“These are the three things people need to learn to succeed today” he said. “The education system right now is not set up to do that in many ways.”

“It’s like they’re learning through osmosis” she said. “They program things on my cellphone I didn’t even know existed.”

Whatever benefits Scratch has to offer, Winkler perhaps best described why he likes Scratch.