Playable environments in video games continue to swell to what feels like gargantuan levels, but just how are we talking here?

According to the next printing of The Guinness Book of World Records: Gamers Edition, the soon to be released open world racing title, PURE, contains 5,560 square miles of playable terrain making the title worthy of an official certificate from the record trackers.‚  Hell, to drive from one side to the other in PURE takes three hours (and loads of patience)!

“We knew FUEL was going to be big,” said Phil Wright, Producer, Codemasters, “but to have this confirmed officially by Guinness World Records justifies our faith in this ground-breaking title. No other game comes close to offering the variety of environments, the range of vehicles or the sheer size of FUEL. ‚ It’s one of the most innovative racers ever, and we’re thrilled it’s been recognised as the biggest console game of all time.” 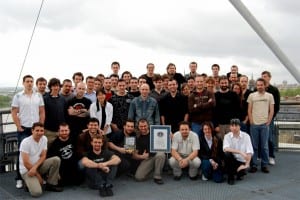 To celebrate the feat, David Dedeine and Sebastian Wloch, the founders of Aboso Studios detailed their ideas of mammoth proportions and the subsequent technical difficulties in the video below.