The June issue of Game Informer is heavy on awesomeness this month filled to the top with news from the Game Freaks themselves regarding the uncertain future of the mammoth Pokƒ©mon universe.

What began as an ambitious endeavor in 1998 with the stateside release of Pokƒ©mon Red and Green quickly exploded to one of the most recognizable, memorable, and lucrative franchises in the history of video games.‚  Pika?

The story today comes from an interview by Game Informer with Junichi Masuda and Takeshi Kawachimaru, game director and game designer at Game Freak respectively where the two speak to the tremendous success of the Poke universe and where the series may be headed.

When asked if core Pokƒ©mon games will evolve into something completely different, Masuda skirted the issue stating “there are fans anxious to get a new game, so for them I would like to do my best to create something very interesting for them.” 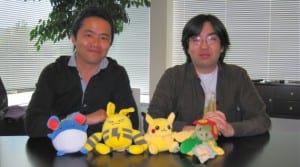 And when asked for clarification, Masuda spilled the poke beans.

“This is just an idea but…as you know, Pokƒ©mon is a role-playing-game. ‚ But personally, I really like the action type of games, so we just talk about that sometimes.‚  We probably want to add some kind of action elements to the game.”

There, he said it, “Pokƒ©mon Blitz” is next.‚  No probably not, and I could not imagine a drastic, abrupt change from the very successful norm, rather they may slowly introduce new elements to build our trust.

The fact of the matter is, no matter what elements Game Freak chooses to use in their next game, it’ll sell like Rare Candy, if you can get your hands on it!