The most alluring part of a new title on a retail shelf has got to be the box art; for it is here that we are initially either drawn in, or disgusted and repulsed.

One video game publisher, Ignition, has gone to great lengths to ensure that the most fan-coveted and appealing cover makes the final build for the upcoming King of Fighters XII and today, again opened the voting to the masses.

Over on the Ignition forums, two options are being offered to gamers for the PS3 and Xbox 360 specific boxart.‚  This time, the winners of the previous round are going up against the Japanese PS3 and X360 finalists.

Remember, the fate of the universe, or maybe just the KOF12 boxart is in your hands!‚  With great power comes great responsibility.‚  Choose wisely.

Both options are imaged below and once your mind is made up, head over to the Ignition forums to cast your official vote. 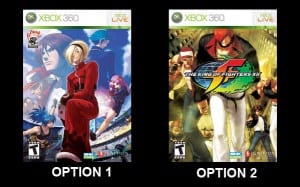