In retrospect, the GameCube was an excellent console as far as software went, but the sales just were not there when compared to last generation’s behemoth, the Playstation 2. It’s no surprise then that there are a multitude of quality titles that many gamers have either never heard of or never got a chance to play, as they chose another console as their primary source of gaming. Nintendo is doing their best to rectify that situation with their New Play Control! line of titles, which breathe a second life into ‘Cube classics for a Wii install base that is already more than twice the size of its predecessor’s, and at a reduced price of $30.

The first wave of Wii-makes included Pikmin, with its improved control scheme and enhanced graphical presentation, and Mario Power Tennis, which was somewhat of a disappointment given its transition to motion controls. The best release during the young lifespan of this line is the latest though, and that’s Donkey Kong Jungle Beat. This platformer was developed by the same studio that made Super Mario Galaxy, and you can see the similarities as far as attention to detail goes “" whether it be graphical, sound, or in the superb level design. 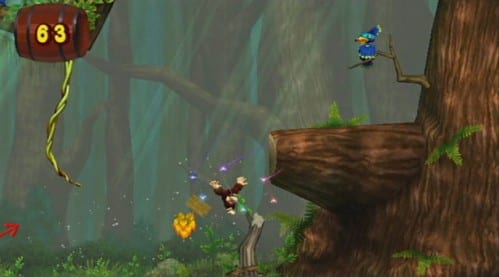 There are two things that make this game a worthwhile entry in the New Play Control! series. First, the original was a critically acclaimed success, and one of the finer titles from GameCube’s diverse lineup “" this title was part of that peak of creativity seen from Nintendo that saw them develop a few new IP (Pikmin, the Skip-developed Chibi Robo), as well as give completely different takes on old ones such as Metroid (moving it to first person). Second, and this matches up with the creativity, the game is controlled with a pair of bongos. You did everything with the bongos, from jumping, to attacking, to simply walking left or right. If you used a standard controller, the analog stick simply mimicked the action of the bongos.

While this can be seen as a stroke of creative awesome by some “" you were banging on bongos to beat people up, after all “" others were turned off from what turned out to be an excellent platformer because of the controller alternative, and sales were dismal given how well it scored across the board. The New Play Control! version of the game scraps those bongo controls for an analog stick and the A button, while keeping some of the bongo moves (attacking, fighting bosses) linked up with the motion to simulate the bongos. Very little is lost in the translation, and what is lost is not missed given how improved the simple things like walking around are with an analog stick rather than the bongos. Yes, there were times against bosses where I would have liked to slam down on bongos to pummel them rather than use my dual controllers like large drumsticks, but the precision given to you by an analog stick “" especially in a platformer that requires the level of precision DK Jungle Beat does “" is more than worth the trade-off. 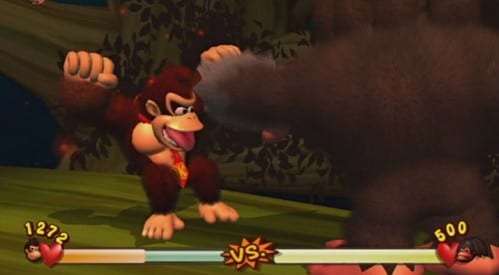 There’s no real story in this title; Donkey Kong simply wants to prove he’s the best in the Jungle, and he’s going to bust the head of anyone who thinks otherwise. This turns out to be fine in the end though, as there is no shortage of quality gameplay in this title. Donkey Kong runs, jumps, swings, floats, pounds his fists, punches enemies, attacks them with waves of sound to stun them… all of the things you expect Kong to do, he does. Keeping up with the tradition begun by Rare back in the days of Donkey Kong Country, this game looks incredible, but uses a different style than those classic platformers.