Of the three, DJ Hero looks very, very interesting.‚  The publisher describes it as expanding the normative userbase by including diverse music genres including hip-hop, R&B, Motown, electronica and dance.‚  The game will come bundled with a turntable controller (image below) and will allow for DJs to “rule the club scene” by creating original mixes of already popular songs.‚  Interesting. 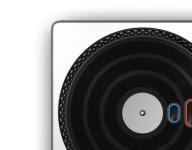 Guitar Hero 5 will be the expected, run of the mill yearly iteration but this time with the added ability to drop in and out of song, change band members, and difficulty in the heat of rock performance.‚  I’m not sure why we need this, but as details surface it may become more apparent.

Band Hero is where things get downright scary.‚  The title will be the first to be rated E10+ and will feature top 40 hits in a more approachable family endeavor from the publisher.‚  Get ready to hear Hannah Montana and various other teeny bopper tunes now in the living room.‚  We knew this day was coming, but now that it is soon to be here, I fear for the genre.‚  Granted it’ll sell like hotcakes, but really?

All three titles are due out this Fall. Be afraid, be very afraid.‚  Activision’s next step is asking for a vote in Congress.