The Camilo Project and its members, Jason “Camilo” Margaca and siblings Mark and Patrina Foley, are trying create something completely different.

With a sound that departs from your run-of-the-mill alternative, the Boston-based band features progressive hip hop beats while maintaining an alternative rock vocal style with lots of strings. Coined informally as “conscious alternative,” the fusion of unique styles from Reggae to old school Nintendo, to Rap and Rock meshes into a sound that becomes more complex with each listen.

This complexity comes from the group members’ varied backgrounds.

Margaca grew up listening to new age and ambient music. Other influences were varied, but most notably, he looked up to Dan Kenney, his childhood piano teacher who happened to be Britney Spears’ former musical director. With Kenney’s help, Margaca started his own music career 10 years ago as a rap producer with mixed results.

“I was working with kids who had a little different lifestyle than me,” Margaca said in a recent interview with Blast. “I had always loved beat reggae and rap, but some of the kids were doing things I didn’t want to be a part of.”

He ended up taking a three-year hiatus from the business only to come back to it with a passion in 2006. After refining his sound, Margaca ended up reconnecting with an old friend, Mark Foley. Mark’s background was more rock-based. Growing up, he was constantly listening to the Carpenters. Growing older, Mark has become obsessed with Gavin Rossdale and Radiohead. “I love when music has a melody mixed with a flow that you can groove to,” he said.

Together, Mark and Jason began early freestyle recordings. They recorded their first song, “Uptight,” which fused the boys’ freestyle abilities. It was at this point that Patrina Foley began to express interest in the early workings of The Camilo Project.

Patrina’s background was different still. Coming off a five-year stint with a “rootsy rock” band, Patrina brought a new dynamic to the group. Together, the trio began to record their self-titled debut album in summer 2007.

Something naturally clicked between these totally different styles. By November 2007, the group had recorded “Midnight Lover,” which proved to be the catapult for the rest of the album.

With the music video for “Midnight Lover” now completed (and another video for “Breathing” out soon), their CD on iTunes, and their music available on programs from Lastfm to Rhapsody, The Camilo Project’s hard work is starting to pay off. 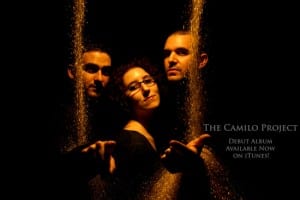 But fame and fortune isn’t necessarily the ultimate goal for Jason, Mark, and Patrina. The Camilo Project, above anything else, is striving to maintain the integrity of the music they create. Distinguishing themselves yet again, the group prides themselves on writing songs that come from personal experience, which helps them maintain a sense of soul that can seem lacking with other artists.

“Artists use the same progressions and same beats over and over again,” Margaca said. “Nobody is trying to be different anymore.”

This band really stands out. Check out their MySpace page for more info on shows and updates from this local act. You won’t be disappointed.