NEW YORK — The highly-anticipated Wonder Woman animated feature will be released March 3 on DVD. The movie tells an updated version of Wonder Woman’s origins and her first big showdown.

Blast got the chance to sit down with Montgomery to talk about the upcoming film.

Kellen Rice: First of all, congratulations on the film.

KR: Last night’s reception had to be exciting.

KR: What’s your experience as a woman working on this film in an industry that’s pretty dominated by men?

LM: I personally haven’t run across any sexism in my career, which is nice. As far as being a woman that gets to work on Wonder Woman, it’s awesome. It’s the greatest thing, because I’ve worked on a lot of action cartoons which are typically geared towards boys and men. And so I draw a whole lot of guys a whole lot of the time. So getting to draw a girl and having her be a main character in the film, as well as a very heavily female supporting case, it was a dream come true. I always want to do whatever I can to get more women involved. When I was a kid watching action cartoons, it was all these guys and there would be be the one token female in the case and she was always my favorite. I always wanted a show that had more girls in it, but a good action show with girls in it, not just the usual stuff like My Little Pony or Strawberry Shortcake.

KR: You definitely did that with the opening scene of Wonder Woman. 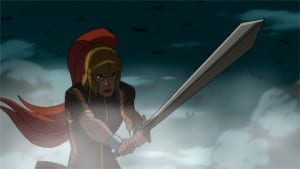 KR: And the supporting cast was so varied. Tell me how you developed those characters.

LM: Being that we have a large cast of Amazons, and they’re all women, we really had to make sure that finer details like facial features and color schemes were individual to each character, so you didn’t get confused watching the movie and think everyone was the same character.‚

LM: Yeah, well especially in the opening scene we went into it wanting everything to have a red feel to it, just because it was such a bloody and violent scene. So we put a lot of red in the costumes, red on the field — and then when we get to Themyscira all the colors were softer, while still saturated and very bright, but just more calming. So we tried to play with the color palette so that the color would fit each scene.

KR: How did you feel when you saw the film for the first time? What was your reaction?

LM: As we’ve been watching it, we started out with pure silence and the animation, and the first time I got to see it with sound effects and music, I found myself getting a little choked up at parts because the music is so amazing. Music does so much to kind of cue your emotions. And the sound effects do a whole lot to add reality and weight to something. When you see two swords hitting in silent animation, it’s not that impressive. But as soon as you add that clink, it’s like “oh, those swords are heavy!” So adding sound to animation is really what saves it. So when we see the finished product it’s so much more impressive seeing it with all the bells and whistles, and I think it really came together.

KR: There were definitely adult themes in the movie. Do you think that animation is heading towards an adult audience as well a children’s audience?

LM: When we make these things we are trying to make movies that we ourselves want to watch. And in Japan, it’s been this way for pretty much forever, they don’t regard animation as a medium only geared towards children. It’s just another medium. It’s another way of storytelling. And in Japan, adults watch cartoons all the time. In America, sadly a lot of times anything animated is assumed to be for kids. If it’s a cartoon, it’s for kids and adults can’t watch it. And we’re just trying to change that, we’re trying to bring animation to a standard where everyone can watch it, and everyone can enjoy it.‚  < 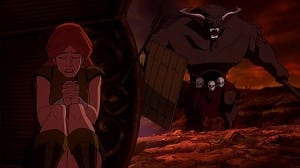 KR: There’s also been a big stigma against superheroes, too.

LM: Right, and I think that video games and comics are becoming more mainstream. It’s not just geared towards the comic book geek, who lives in, you know, his mother’s basement. It’s for everyone – geeks are everyone. Like everyone has an inner geek and you’ll find the most normal of people playing video games these days. And so the audience is just becoming infinitely wider and I think all of these mediums – video games, comics, animation — will become much more accepted to everyone.

LM: The kids who used to watch the‚ Saturday‚ morning cartoons are now adults and they’re now getting into the positions where they can green-light the movies they always wanted to see. And so the more kids that are watching these shows when they grow up they’re going to do the same thing. I think it’s only just begun, and I think it’s got everywhere to go from this point.

KR: What movie hasn’t been made that you want to work on?

LM: I’m more than happy to work on any comic-book female-driven movie. Those are the ones that I enjoy working on most, just because I love working with female characters. I find that they’re more expressive, they have more options, they’re just more fun to direct. That being said, I’m also a fan of Aquaman. He’s always gotten a bad rap, and I think there’s untapped potential there and I’d like to see him actually be cool for once.

KR: Someone at the panel brought up Selina Kyle. Could you see her carrying her own film?

LM: I definitely could, and she’s an intriguing character. I think she’d be awesome to work on, especially because she has that side of her that not only can she be good but she can be a villain as well. And that makes her just that more interesting.

KR: Well, that’s kind of unfair of me.

KR: What do you think has made Wonder Woman endure for so long?

LM: She has an interesting story, which is nice. She’s got this really interesting back story which is rooted in this mythology, and mythology itself is just a series of epic stories. And we also have the feminist aspect of her, which is that she is the one hero woman that’s kind of standing on her own in the DC universe. Most other women have spawned as sidekicks or villains to some other male hero, but you know she’s on her own.‚

KR: What’s your process of‚ creating a character? How did you create this version of Wonder Woman?

LM: First I’ll just brainstorm and put down a whole bunch of different sketches. From there, you just throw out the ones you hate. And you start to hone in on qualities you like. For instance Wonder Woman has a lot for different costume versions. And one of the things I thought of, in Justice League she has more low-cut panties and in New Frontier, she has the skirt. So I wanted to a different version, just to make her a different Wonder Woman. So I gave her the more high-cut bikini bottoms, and that’s just a technical thing. The hair shape was just something I found early on and I thought was a distinct shape.‚

KR: It also modernized the character.

LM: Right, and also just the fact that we were trying to make her younger and so that was a conscious choice on my part.

KR: What about Steve Trevor?

LM: I looked at the reference for Steve, and he looked kind of dated, kind of older. So we tried to bring him a little more into the now. I actually originally started with him have slightly longer hair, but then Bruce made the very good point that if he’s in the Air Force, he would need a shorter hair cut so we have to revise that and I’d made a page full of possible Steve hair-dos and I showed them to Bruce and he said, oh, I like the Caesar cut. And it’s easy to animate. So we went with that.

KR: It works with the Greek and Roman theme.

LM: And that’s one thing too. Ares had a similar bang style.

KR: You talked about the design of Hades at the panel. What kind of reaction did you want the audience have after seeing him?

LM: I’m hoping that they almost get a little uncomfortable, because I really wanted him to look massive. Not even in girth, but just 50% larger even in bone size from Ares. I had this theory that Zeus and Hades are like, the top tier of gods. Ares is one step down because he’s a son of Zeus. So I wanted just a size difference if they were standing, and then I expanded Hades outward. And he was actually super-fun to draw, with all those curves. And then someone pointed out that he looked like Ursula, and you know what, if he is an Ursula rip-off, it was 100% subconscious. It was not intentional at all, but it does happen that The Little Mermaid is my favorite movie of all time.‚

KR: I think that’s all our time. Thanks so much for sitting down with me — great job on the film. It was a pleasure. 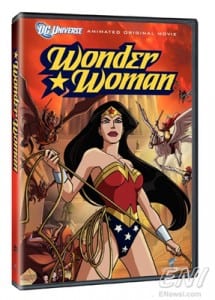 Is your curiosity piqued yet? Head to the stores to pick up your own copy of Wonder Woman on March 3.