Search
Home
No Fries in '09 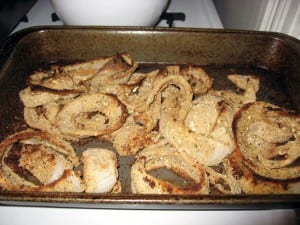 Baking did not work for onion rings.

They’re not good for you.

According to About.com, a single serving of 8-9 onion rings contains 276 calories, 15.5 grams of fat, including 7 grams of saturated fat, 14 milligrams of cholesterol, and almost 20 percent of your daily sodium. Plus there’s more than 31 grams of carbs!

I set out to see if there was a way to reduce the fat content and still create some deliciousness by breading and baking onion rings.

I failed. And I set off the smoke detector. Three times.

Cutting onion rings is easy. Slice off the top and bottom of the onion. Just be careful. It’s really easy to slip with the knife here. Then make a shallow incision down the length of the onion and peel off the skin layer. 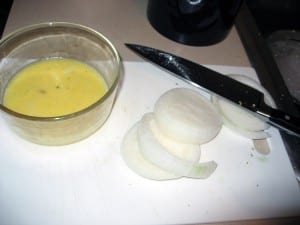 Hold the onion very carefully on its side and slice it into half-inch rings. Peel the ring layers apart for individual rings.

What I did next was break and mix two eggs with about a third of a cup of water in a bowl. I combined bread crumbs, crushed saltines, salt, pepper and Cajun spice mix into another. I dipped the rings into the crumbs, the egg, and then the crumbs again and spread them out on a non-stick baking pan.

Then I baked them for 15 minutes at 450 degrees, but when they came out they tasted more like eggs and less like onions! They were also soggy and looked raw.

Then I broiled them on high for another five minutes to try and get some crisp out of these babies. That set off the smoke detector.

When they came out, they still tasted eggy.

I guess I could have cooked them longer at a lower temperature, but I was more trying to crisp them out than bake them. I worried about the rings being too soggy if they baked at low for a while.

Broiling them didn’t work at all. The rings still didn’t taste right. 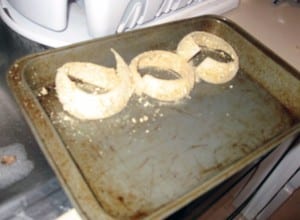 Another problem could be the mass number of rings piling on top of each other might diffuse the heat.

Another problem I thought of was that the mass number of rings piling on top of each other might diffuse the heat.

If I try this again, I might cover and bake them at 350 for about a half hour or more and then uncover them at maybe 425 for the last few minutes.

There are actually several recipes online for baked onion rings. Some ask you to soak them in water for a half hour first, which I might try.

Bottom line: There are still a ton of carbs, and the egg still adds fat and cholesterol. This might just be not meant to be.