Lee is the executive creative director for Sony’s upcoming DC Universe Online, a massive multiplayer online role playing game. In an interview with Blast, Lee said he hopes to bring his art and the stories of the DC universe into houses that would never have heard them.

With a hat shielding his face from the bright florescent lights lining the room, it was almost hard to see the bags under his eyes. Clearly tired, he still managed to put on his game face. Over this long New York Comic Con weekend, he had done a couple panels, several interviews, and now, a party for a game he is a very big part of. 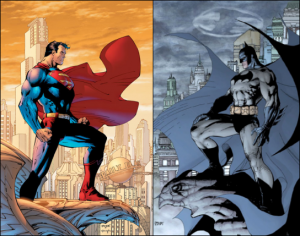 Talking about his role in DC Universe Online, Lee laughs as he remembers his official title of “Executive Creative Director.” Sounds a bit on the bland side, but he explains that his job is to effectively make the skeleton in which this game will rest upon.

“I’m involved with a lot of the concept art, and it’s my job to report back to DC if the game looks right or not,” said Lee describing the multiple facets of his new job.

Lee did most of the conceptual artwork for not only the heroes and villains, but also the cityscape and landmarks throughout the game. Sony explained that more than 300 city blocks were designed just for a game demo and that’s only a very small fraction of the game. “Metropolis is huge,” Lee said, “There is just so much going on there that it really takes a while to grasp it all. You have S.T.A.R. Labs, Centennial Park with the big Superman statue and of course the Daily Planet.”

Lee said he was very excited about the game and the concept of it being a MMORPG. He says he’s a gamer, and it’s clear he means it, making mention of macros and zones, both familiar aspects to those who have played games of this genre, to pad his cred. “I’ve been playing MMO’s for a while now: EverQuest, EverQuest 2, Warcraft. But I like shooters too”

DC Universe online brought out a completely new challenge for Lee. He had to do something that had never been done before: design all of Gotham City and Metropolis. In all the years of Batman and Superman comics, no one has ever had to make a layout of their iconic cities. Sure, comic fans know what landmarks are in each city but not how they are placed on the map. Lee explained that comic tradition is to use the location to aid the story, rather than the story to be defined by the location.

“If in one book, the Daily Planet was 50 stories tall and next time it was 75, no one blinked an eye, because it was for the story to progress.” Now suddenly, Lee needed to define everything, and that was a problem. It was a new issue to someone who had spent 20 years drawing books, and that isn’t something you see every day in the world of comics. 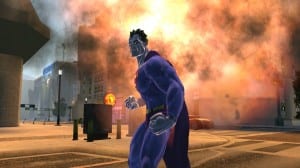 To compound the problem, he needed to add in landmarks to make every area unique so that players can tell the difference and assign meeting places. “I needed to go through and add in all these little nooks and landmarks. Everyone knows the Daily Planet and Centennial Park, but we didn’t want everyone gathering at only those places,” Lee said.

Things that were just background in the past, suddenly needed to be the focus.

“Sure, it was challenging, but I think we got it right,” Lee said. “Sometimes stuff just falls right into place.”

The whole basis of the game is that you get to design and in essence, be your own superhero in the DC universe. Jim talked for a bit about the challenges of making interchangeable designs, to allow for maximum uniqueness, and then explained another overlooked part of the design process: character silhouette.

“We spent a lot of time creating iconic silhouettes,” Lee said, noting that it was one of the most important aspects to him. “It’s important that from far away, you could see someone like Superman, and still knows its Superman because his shape is unique. Not many characters in the DC Universe have weird or awkward shapes, so we made a few standard bodies to pick from.”

His eyes perk up when talking about the transition from being a comic artist to a concept designer. He explained that his biggest personal problem. “I need to clean up my lines,” Lee said. He was referring to the anatomy of the characters he draws day in and day out.

“When I draw for comics, things are more stylized. I tend to draw females with longer legs and guys with sloped shoulders,” Lee said. Those may look right in place in the 2D world, but when put in the third dimension, they make them look awkward and sometimes “downright monstrous”, as he put it.

“Functionally, my biggest problem was the shoulders. They didn’t articulate well,” Lee said.