Most little girls dream of becoming the prima ballerina, for Heather Myers, one of the soloists from Boston Ballet’s “Black and White,” this dream became reality.

Although it was not easy, Myers explained eloquently where her endeavors lead her, including when she started, and where she’s at now. Landing a gig with the Boston Ballet took talent, ambition and a pinch of luck, and the Canadian-born Myers has become one of Boston’s finest gems among many of its performers.

Blast Magazine asked Myers some questions that plenty of arts fans ask themselves while being captivated by her performances in shows like “The Nutcracker” and “Swan Lake.”

Blast: When did you start dancing?

HM: I started taking‚ free dance classes‚ when I was 4.

Blast: What made you want to get into to dancing as a profession?

HM: The transition into a career in dance seemed to happen pretty organically over time as I became more and more serious about it and realized that making a living at it was possible.

Blast: What did you have to do?

HM: To become a dancer I went away to professional ballet school at a young age and then trained pretty intensively until shortly after graduating from high school. From there it was a question of extensive auditioning and determination to get my first job.

Blast: Was it easy?

HM: Neither the training nor the‚ job hunt‚ was easy but few worthwhile endeavors are. 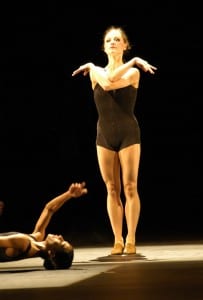 HM: The things I like the most about the art of dance and ballet are its ability to effect and connect with people and the instinctive expressiveness of movement and music that it taps into and develops.

Blast: Is it your favorite dance style?

HM: Contemporary ballet‚ or dance such as the‚ Black and White‚ program are my favorite style of dance.

HM: As a dancer, what I like most about Black and White is Kylian’s beautiful and direct portrayal of the concepts. The dances feel like an enhancement what we are as humans rather than an interpretation of a story or characters. There is an earthiness and a truth to this program (as well as humor and levity).

Blast: What’s your favorite part of the show?

HM: I love the whole show. It is too difficult to pick a favorite part. Seeing the company’s‚ principal dancers‚ doing the work of such a master choreographer is definitely worth the night out!

Blast: What makes B/W different from other performances?

HM: This is the‚ U.S.‚ premiere of this full Kylian program. One very unique thing about it is that while it is technically 5 separate pieces, they are really all part of the same presentation and strung together by intention, style and some certain props/costumes, and are enriched by being seen all together.

It is also a program which is extremely loved by the dancers and meaningful to many of us. There is a lot of dancing for a wide range of company members and we are very lucky and happy to be dancing it: and this will almost definitely come through in our performances.