WASHINGTON — Well another president has come and gone, and we stand basking in the glow of America’s great Historical Renaissance. Cue the ghosts of FDR, Lincoln and Kennedy.

Millions of people witnessed President Barack Obama’s inauguration, but I went to our nation’s capital for a different reason.

Nestled in Virginia-for-lovers, and on the coast, you are greeted by sweeping blue skies and marshmallow clouds mirrored in the famous pond in front of the Capitol Building, we saw so many people wading through post-inauguration. Whilst I believe perhaps a few more of our politicians should maybe take a trip down to this massive pond, take a peak in and get a grip on reality.

I don’t, however, suggest to anyone to wade in said pond, no need to leave Washington as slimy as so many others have entered.

The weather is generally pleasant,‚  with lots of sunshine, so put on your walking shoes and load your iPod with victory songs. We’re going marchin’ on Washington.

The National Mall is a Mecca of people-watching, as Washingtonians flock to jog off the latest pork belly bill, and these folks are in good shape. With the Capitol and the Lincoln Memorial shining like beacons at each end, either side of The Mall is flanked by the Smithsonian Museums, which could take you days to explore in its entirety. ‚

One of the newest buildings in the Smithsonian Institute is the National Museum of the Native American which is a merit in American architecture. In fact, all of the Smithsonian buildings are amazingly designed, and are a part of the art that they house.‚  Even if years of American History and global art didn’t rest in peace safely behind these well designed walls, there is plenty of eye candy just taking a stroll up and down the Mall.

My first trip to Washington was in Middle School. Spending my young life in Catholic school, a light in the dark was a class expedition. I was enamored then, as I am now. The entire city is well kept, a much needed escape from the grimy horizon-less New York City I call home, and each lawn, monument, tourist attraction and White House is perfectly manicured, and represents a variety of native flora and fauna.‚

The birds and squirrels that reside within the district’s boundaries must have been laid off by Disney — they are so accustomed to human interaction that they often come up and look at you as if to have a conversation on the state of affairs. If only they could speak English; the tales I’m sure they would tell. 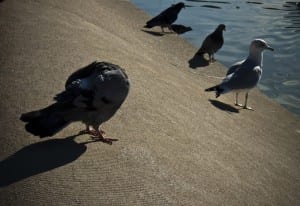 The National Mall is a Mecca of people-watching, as Washingtonians flock to jog off the latest pork belly bill, and these folks are in good shape

Aside from the obvious Mall walk,‚ D.C. has several not-so-off-the-beaten-path areas that are filled with as much charm as David Hasselhoff in his glory days.‚  Penn’s Quarter has become the center of arts and theater, with a brand new arena the NHL’s Capitols call home. Typical of any melting pot city lies a bustling Chinatown. Forget about opium dens and dark alleys, D.C.’s Chinatown is clean, neat and tourist-friendly. It’s also an easy ride on the Metro.

An homage to superheroes everywhere, the Metro is well lit, clean, and sculptural eye candy, worthy of any Gotham or Metropolis. Union Station is a standard on any D.C. tour. Reminiscent of Grand Central Station in New York City, Union Station is chock-full of 5-star restaurant and food court alike, with shops to whittle away time waiting for your train.

If you’re looking for the Fifth Avenue of D.C. then hop on the Metro over to Georgetown. Home of Georgetown University, this area of the district is vibrant and young, with pizza to make New York blush. Most of the 200 year-old row houses have been restored to their “Young Republic” heyday.

Only 68.3 square miles, D.C. is less than lacking in life, even though the majority of what is projected seems old and crotchety. D.C. is the center of the new American Renaissance, and deservedly so.