I love Steve Martin. I loved him on Saturday Night Live. I love his classic roles in “The Jerk” and “Roxanne.” And I love his newer roles, particularly his bit part as a hippie business owner in “Baby Mama” and a guest star appearance he made on 30 Rock.

But I cannot forgive him this.

The original “Pink Panther” films starred the irrepressible Peter Sellers in the 1960s and 70s. The films, about the bumbling-yet-brilliant French detective, Inspector Clouseau, remain masterpieces of physical comedy. I still remember the scene where Clouseau fights his manservant Cato in “The Pink Panther Strikes Again” as being one of my favorites as a child.

The sequel stands alone story-wise to Martin’s original, with Clouseau joining a “dream team” of detectives from around the world to track down a master thief. He’s joined by his trusty sidekick Ponton (Jean Reno) and his beloved secretary Nicole (Emily Mortimer).

There is nothing more depressing in Hollywood than the decline of a comedic actor. The problem with Martin is that there’s a terrific amount of evidence to show that he’s not in decline. Besides the aforementioned bit roles in “Baby Mama” and 30 Rock, every interview I’ve seen with him demonstrates that he’s still got game. He’s engaging, quick-witted, and his jokes still have great timing. But then he puts out stinkers like “Pink Panther” or the egregious “Cheaper by the Dozen”, and I find myself on the couch, watching “Bowfinger” with tears in my eyes, longing for the glory days of yore.

Martin’s Clouseau is not endearing. He’s just irritating. Instead of Sellers delighting us with his bad-on-purpose French accent, we have Martin saying “hamburger” seven thousand times until we want to strangle him. Instead of Sellers’ balletic physicality, we have Martin in a ridiculous flamenco dancer’s costume, tripping over shoe laces. The most infuriating thing is that we know Martin is capable of doing better.

The dialogue (partially written by Martin himself) isn’t awful, just mediocre. They do manage to get off a few good lines: Kenji (Yuki Matsuzaki), the Japanese detective, says of Clouseau “I’m going to have to stop being a Buddhist, I’m so filled with hate.” But most of the time the lines are adequate, yet lack the punch and timing necessary to actually, you know, make people laugh. Everything just seems to be one step out of sync. 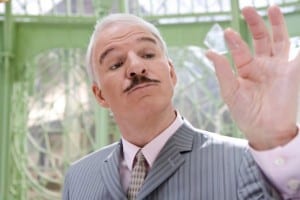 Not sure if we can forgive Steve Martin for this one

In the film’s defense, there was nothing in it that struck me as outrageously offensive. It’s just entirely what you would expect — not very well-written, with mediocre physical humor and boring performances. But that’s precisely the problem: considering the source material (and a lineup of truly terrific performers) mediocre is a failure. There’s no excuse for boring when you have talent like Reno and Mortimer, as well as Alfred Molina, Andy Garcia, Bollywood star Aishwarya Rai, John Cleese, Lily Tomlin and Jeremy Irons. Most of the time you simply have to put any one of these fine actors in the frame and the rest is accomplished by itself.

I would listen to Irons deliver an instruction manual.

But there was no joy in any of their performances. And there’s nothing less pleasant than watching a group of talented people phone it in.

The only motive these people can have for agreeing to be in this film is either an absurd amount of money or blackmail. The former may be more likely, but the latter would explain why none of them look all that happy to be there.

I understand that Martin needs to pay the bills. And there’s nothing wrong with a relatively bad film if you come at it with panache and self-awareness. But there’s no defense for this kind of flat, flavorless material.

Now if you’ll excuse me, I’m going to go watch “Little Shop of Horrors” again and make myself feel better.