Boston band Vivian Darkbloom looks like most other rock groups, but if you look closely, something might catch your eye: the Nintendo Wii controller attached to the guitar.

Guitarist Rob Morris, with the help of a laptop, some software, and a bit of Velcro, can move, shake, or tilt his souped-up guitar to change its sound on the fly. 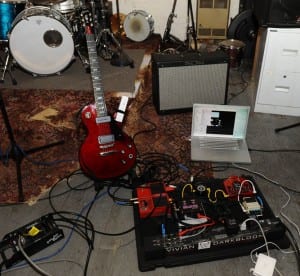 1. Attach the remote to the guitar: Duct tape works. Velcro is a little fancier. Don’t let it fall off on stage.

3. Software: The Max/MSP multimedia suite to translate the controller’s motions into any guitar effect he wants. Besides pitch and echo, he likes the “granular synthesis” effect, which can create blips and beeps that sound like old video games.

4. Convert to audio: Plug the guitar and laptop into a PreSonus Firebox, and connect the Firebox into an…

Vivian Darkbloom plays tonight at 7:30 as part of the Boston Music Spotlight Live series at Olivers Nightclub at the Cask ‘n Flagon. 21+. $10 at the door.

Click here to read John’s story in the Boston Globe.