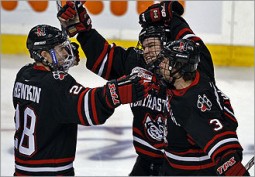 Next Monday, Boston University and Northeastern will face off in the Beanpot hockey finals.

No, that isn’t a mistake. Northeastern.

The Huskies haven’t won the Beanpot since 1988, but don’t be fooled; this is a much different NU team. Last night the Huskies pulled off a 6-1 beating of Boston College, the defending national champions, when even powerhouse BU struggled against a pathetic Harvard team.

The Beanpot has been held each year since 1952 and features four Boston area college hockey teams: BC, BU, Harvard and Northeastern. The women’s hockey teams from each of the schools compete in their own Beanpot. Their qualifying rounds will take place tonight.

BU (20-5-1) is now ranked first in the nation, with Northeastern ranked third after compiling an 18-6-2 record. Seeing how they didn’t even get 18 wins through all of last season, their record is a vast improvement over their 16-18-3 finish last year. A Beanpot win would be the icing on the cake for a team that has something to prove.