This is the first of a new line of articles about old-school comic books.

Published since 1940, this venerable “funny animal” comic book has enjoyed 700 issues over 70 years. WDC&S is an important title for many reasons — including the fact that it had the honor of being the home of hundreds of the first and original stories about Donald Duck, Uncle Scrooge, Donald’s nephews Huey, Dewey and Louie and the dreaded Beagle Boys written by Carl Barks.

Barks’ stint with WDC&S began with issue 31 in 1943, (the first 30 issues contained reprints of newspaper comic strips by Al Taliaferro) and he didn’t stop writing and drawing at least one feature story in every issue until #312, in 1966. Along the way, Barks created an entire extended family for Donald, including his girlfriend Daisy, his rich but miserly Uncle Scrooge McDuck, his maddeningly lucky cousin Gladstone Gander, the aforementioned Beagle Boys, Grandma Duck, zany inventor Gyro Gearloose and many other characters.

Barks never received credit in the pages of this or other comics on which he worked, but his zany stories and characters and unparalleled depiction of the duck characters earned him fame of a sort even back in the day. He was known simply as “the good artist” because compared to him, no one could really do Donald and the gang justice visually. (As a lad, my mother, who’d been a fan since childhood, raised me right and I quickly learned to discern Barks’ work from the pretenders’ – if the story wasn’t drawn by “the good artist,” she wouldn’t read it to me.) 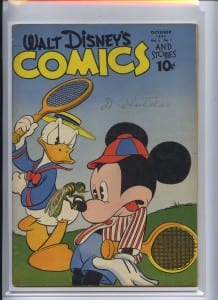 WDC&S sold in massive quantities, but the characters and stories were so widely popular that most copies were passed around over the years, so finding copies in grades higher than fine is extremely difficult.

Barks’ work didn’t grace theactual cover of Walt Disney’s Comics & Stories until issue 95 — all of the examples shown here except issue 167 (Barks) were done by Walt Kelly, arguably the second most important and influential “funny animal” artist in history. While Kelly’s cover renderings of Donald and company are gorgeous, Kelly never drew an actual story in WDC&S, and he’s far more famous for having created Pogo the Possum.

WDC&S sold in massive quantities — as many as several million copies of each issue were printed monthly during its heyday. But the characters and stories were so widely popular that most copies were passed around among dozens (or even hundreds) of young fans over the years, so finding copies of the Golden and early Silver Age issues in grades higher than Fine is extremely difficult.