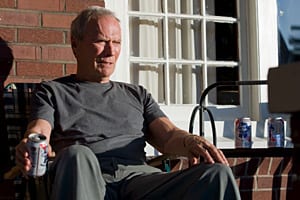 The Oscar noms are out and one name (and film) completely missing from recognition is Clint Eastwood for his amazing performance in an equally great movie, Gran Torino.

Poor Clint. This may even be the screen legend’s last film:

“Somebody asked what I’d do next, and I said that I didn’t know how many roles there are for 78-year-old guys,” he told The Scotsman earlier this month.

Also, why is the Academy sucking Brad Pitt’s dick on Benjamin Button? It was good but not as good as say, WALL-E (also snubbed from the Best Picture category). This is animation discrimination and I thought we, as a movie-loving people, were not going to take it anymore. It’s so clear that the Academy wants Brad and his lady friend…oh, shoot. What’s her name? The other one…uh… (–ala Kate Winslet at the Golden Globes) to be there to garner viewers. It’s shameless. Why not just forgo the ceremony and hand the award to the aforementioned Winslet already? She’s the only one in the category that deserves it.