MUMBAI, India — In a newly crafted display window, tucked in the back corner of the lobby of the Taj Mahal Palace and Tower Hotel, was a piece of art, aptly named the “Tree of Life.” The work, beside a plaque listing the names of those who had perished in the Taj, was all that remained visible of the day that terrorists had stormed the lobby, and held hostage its guests and staff. In front of the window, hotel guests lined up to sign their named in a book, writing things like, “The spirit of the Taj is uncrushable,” and, “terrorism will not prevail.”

These sorts of comments have come to engender the spirit of the Indian population. As a nation, India has endured nearly one terror attack every month since last July, and lost over 2000 people to these attacks in the past year, but in the face of terror, the country has always bounced back immediately. Though the Indian media jumped at the chance to compare they day they dubbed “26/11” to 9/11, the societal reactions haven’t compared.

When I made my first visit to New York, two months after the assault on the twin towers, the city was still in deep mourning, wreaths, candles, and photos of missing loved ones plastering every corner of the metropolis. When I eventually moved there three years later, the photos of missing people had vanished, but little else had changed. After seven years, New York City is still having trouble moving on. Every September 11th the city fills the skyline with two perpetual spotlights in place of the towers. Bagpipe players mourn for the dead in the streets of the Financial District, as throughout the day all the names of those who were lost when the towers crumbled are read aloud. As we come into 2009 the site of the twin towers is still nothing more than a gigantic hole in the ground, an open wound that refuses to allow New York City to move on. The Financial District is still a comparative ghost town. 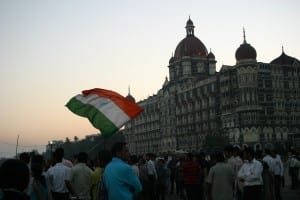 The Taj a month later/KRISTEN V. BROWN FOR BLAST MAGAZINE

One month to the day after gunmen entered the Taj Mahal Hotel on November 26, the lobby of the hotel looked once again as it always had. In the hours of the attacks, the perfectly polished marble floors were stained with blood, the stately atmosphere muffled by screams and sprays of bullets. But by December 26, the hotel that had once played host to Mick Jagger, Jackie Kennedy and The Beatles had regained its regal composure, the lobby decorated for Christmas as it buzzed with equal mixes of tourists and the well to-do. Easily the most majestic landmark of the Mumbai skyline, the Taj is an architectural marvel that has played host to many of the worlds most powerful since it first opened its doors in 1903, founded by industrialist Jamshedji Tata, as the first luxury hotel in the city that booked Indian as well as white guests.

The day after the firing stopped, Indian papers and news stations reported of an eerie ghost town Mumbai had become. But by that time , everyone was already back at work. And only one month after the attack on Mumbai, life had once again become de rigueur, at least partially because for Indians, unlike Americans and 9/11, terrorism is the norm. In New York, we obsessed over the events of 9/11 for years, letting our obsession dominate our public space, and keep us from resuming our normal lives. In India, even though the Mumbai attacks were thus far unprecedented and surely have had a lasting impact on the people of Mumbai, Mumbaikers have learned not to let terrorism get the best of them. They pull together, go back to work, and refuse to let such evil misdeeds interfere with their way of living.