The Sunday comics have always been the best, though in an increasingly paperless world, we often forget that the comic section even exists.

Now there’s a new comic strip to look forward to every Sunday without having to buy a paper: 6 or 7 Popes, a webcomic developed by You & What Productions, a group of college students mostly from Emerson University. Chaz Formichella and Matt Durman, the founders of You & What, came up with the comedy group for a speech class and through developing it, came up with “6 or 7 Popes”.

“We were actually talking about another idea. . . and in brainstorming ideas for that, we started talking about the Pope. We thought we could probably come up with 6 or 7 different popes, and really liked the sound of that, like what could they be — space pope, chocolate pope?‚  Well why is it 6 or 7? Well 2 of them would have to work together,” Formichella explained.

The popes live in an elaborately planned out universe where each pope represents a different world. There are five regularly sized popes: Birthday Pope, Chocolate Pope, Pope Benedict XVI, Space Pope and Ape Pope, and two tiny popes, with their own tiny subplot, that sometimes have to combine their powers to create one slightly larger pope. It all starts at a Popes of the Universe Convention, which suffers a surprise attack, leaving only our characters to fight for justice and Catholicism across space. Speaking of space, Space Pope happens to be a woman, making a statement on progression — maybe the sky’s the limit?

A few popes didn’t make the final cut; for example, Roomba Pope, which according to the comic combines “cleanliness and Godliness” in this bit. 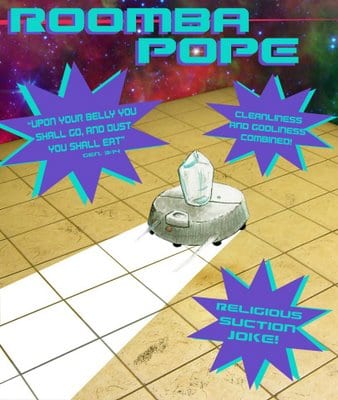 Cleanliness is next to godliness

Every comic strip will contain the same popes, but there will be no continuous plot to save the world. “Each strip is a little window into the “6 or 7 Popes” world, so they don’t really build on each other. Eventually, and I don’t know when, we are going to put together a script and a plot for something big – like a graphic novel or maybe just a long series that we put online where we go into the actual story going on around the webcomic, sort of the origin story,” Formichella said enthusiastically.

For now, You and What will simply be trying to get out a strip a week while dealing with school and winter break. “It’s going to be weekly, we’re trying our hardest to keep it weekly since we’re all away from school right now. We’re trying to have one up each Sunday.”

With the ambitious goal of having a strip planned, drawn, and published each week, a lot of the work lies on You & What’s lone artist, Nick Mcgee, the only member of the group who doesn’t currently attend Emerson. Admitting to the pressure, McGee said “it is actually really hard at the moment. I’m kind of starting to find myself a routine to make sure I can get out all this artwork and do what I do all the time. The most stressful part is that I’m doing it all by hand.”

McGee explained his involvement in the project: “I met Matt, who was roommates with a guy I worked with at the time, and he said he had a project and found out I was an artist”. The guys meet once a week to write out the strip and revise it, though Chaz and Matt have a few back stocked just in case, and Nick scratches out a rough draft in pencil. “I just use pencil and marker and then we scan it in and Steve Donovan puts in all the text,” Nick explained. While his artwork is truly impressive, he’s actually new to comic-style illustrations.

“This isn’t necessarily the type of art I do – I haven’t actually done any comics before. I’ve done more serious work so this is my first time doing something comedy based with a group that’s producing something on a regular basis,” he said.

You & What Productions is growing, surpassing the numbers of their beloved popes to 8 or 9 members: Chaz Formichella, Matt Derman, Ed Reed IV, Nick Mcgee, Gaby Dunn, Steve Donovan, Charles Pieper, John Barrett and their most recent addition, Gregory Goodness. “6 or 7 Popes” has only been out for a month, but keep an eye out for updates each Sunday and future projects coming from You & What Productions including a podcast coming out this spring.