When you think of sipping drinks, vodka rarely comes to mind. Odorless, tasteless alcohol isn’t supposed to be enjoyed, right? We laugh at ads proclaiming a certain fowl-branded vodka to be “the world’s best tasting vodka.”

So we poured a shot or several.

Zyr applies nine filtrations, five distillations and three tastings to each batch. We’re not sure if it’s the best Russian vodka on the market, but we’re impressed.

It looks crystal-clear. The nose is clean with some lemon peel hints. As for taste, the vodka bites and finishes smooth with a hint of pepper. The vodka is made with a bit of rye, which adds to the flavor.

We recommend it cold and neat. It shoots really well and mixes well, like any other good vodka.

We still say this whole “flavor” thing in plain vodka is out of hand, though. 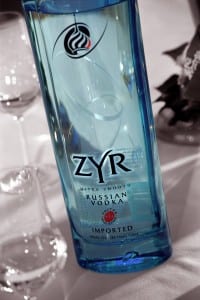