North Pole “" On an early weekday morning in the Arctic, Santa Claus sits at the head of a large conference table, surrounded by perhaps a dozen of his associates.

Claus, 145, is holding his annual Christmas preparation meeting, which takes place every Dec. 1.

Among those flanking Claus are his director of transportation, Rudolph the Red-Nosed Reindeer as well as several veteran elves who head his manufacturing team. They look anxious as Claus begins the meeting.

The annual meeting is typically a festive “" if dizzying “" affair, as key Christmas officials plan for their busy season. It is, after all, almost Christmas: a multibillion-dollar, worldwide project that not only brings joy to millions of families, but may also be the most ambitious commercial enterprise in modern history.

But this year is different. Faced with the worst economic crisis since the 1930s, this year’s meeting is absent the yuletide giddiness that Christmas executives often exude as they enter the home stretch of the holiday season.

While the North Pole may be, from a geographical standpoint, the most isolated place to work in the entire world, Claus and his staff of more than 1,000 now find themselves in the thick of the global recession.

And, as is always the case when standing at the North Pole, all directions are pointing south.

“My friends, I cannot mince words. The global economic downturn has turned our financial structure on its head, and we must find a way to make ends meet” said Claus, whose bright red nose contrasted mightily with the look of abject fear in his eyes. “Nothing is off the table “" layoffs, cuts in services, government aid, increased fundraising “" we must act now to remain sustainable, or there may be no Christmas this year.”

Indeed, the finances are not pretty. While Claus maintains that he kept impeccable records of all his expenses, he said the current crisis constitutes a perfect storm of economic trouble.

In July, facing record-high oil prices, Claus feared that, if the cost of heating fuel rose any further, he would struggle to heat his headquarters, which are located in a region where winter temperatures range from 45 below zero to minus 15. So Claus locked in on a contract for heating oil at about $5 per gallon; since then, the price of crude oil has plummeted from its peak of $147 at a barrel to around $40 now, and heating oil is now selling for less than $3 a gallon.

“It is so frustrating” he said. “I thought it was going to keep going up. I thought I was doing the right thing.”

And that is just the start of the problems facing the Christmas industry this year. Claus’ elves, who live together in a large housing complex, foolishly bought into an adjustable-rate subprime mortgage in 2006, before the housing bubble had burst. Now, unable to make their monthly payments and still send the kids through Elf School, they are 23 days into a foreclosure process.

Further, Claus has been disproportionately affected by the rising costs of health care. Elves, which make up the bulk of Santa’s work force, are thought to be immortal, meaning their pensions and health-care benefits never stop. Further, they are also thought to be “gods of fertility” according to Germanic mythology, and reproduce more often than humans.

“My labor costs are through the roof. If I hired elves overseas, they could work for 8 cents an hour” Claus said, who noted that massive elf layoffs are possible if they are not willing to make concessions.

The Elves Union has publicly cautioned Santa to rule out layoffs.

“Elves are the lifeblood of Christmas, even if they may not get the recognition that Santa Claus gets” said one representative of the Elves Union. “Besides, maybe Santa ought to consider ways to cut his own health-care costs. I have heard of him eating thousands of cookies in a single night, and he has a body mass index of 34.9, which makes him morbidly obese.”

Too big to fail

“I don’t want to see anyone lose his or her job” Claus said, and layoffs will be used only as a last resort.

“AIG gets a bailout. Citigroup gets a bailout” said a disheveled-looking Claus as his sipped his third cup of eggnog. “I bring Christmas cheer to millions of people all over the globe and singlehandedly keep the retail sector afloat for months at a time. Where is my bailout?”

“Christmas is simply too big to fail” Claus said.

Frank, the Massachusetts congressman, said he’s aware of how important Christmas is to the national economy, and his committee will look at a Christmas bailout. But, he warned, any package would include far more intrusive regulations than Claus has been subject to in the past.

“We want coal and wood to be placed in each stocking, so we can help needy families who are struggling with heating their homes” Frank said. “And we will make sure that Claus is investing in green technology as well.”

Alaska Gov. Sarah Palin has also come out in favor of a Christmas bailout.

“Darn right Santa needs a bailout. He is crucial to U.S. economic stability and bringing good jobs” she said. “I should know; I can see the North Pole from my home in Alaska.” 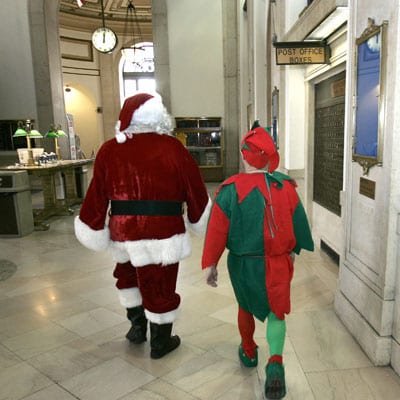 Santa Claus and an Elf leave the Capitol Building after testifying before the House Finance Committee; Claus is asking for money from U.S. taxpayers to help fund Christmas this year

If Claus is unable to secure a bailout, he said he will have to make painful cuts.

He has already raised his standards for children to be put on his “nice” list, and as a result more than 27,000 children who were eligible for Christmas services in 2008 will be placed on the “naughty list.” That saved Claus more than $3 million, but he said it is still not nearly enough.

Christmas officials have suggested other controversial ideas, such as having Claus send e-cards to cut down on shipping and administrative costs, basing eligibility for services on income, and even selling some treasures from his headquarters.

“Did you know that I, St. Nick, am the “Ëœpatron saint of pawnbroking’?” Claus joked. “It is true. So maybe we will start liquidating some of our items. There must be a museum or two out there that would want a titanium sled with NORAD tracking capabilities.”

But above all else, Claus said, he is concerned about the children and how they may be affected this Christmas.

“I want children to know that, just because there may not be as many gifts under the tree this year, that does not mean it cannot be a great Christmas” Claus said. “It is just a tough year for a lot of parents, and for Santa. But we will get through it.”