A few years ago, you were looking at $400+ for any decent Cambridge SoundWorks product at their mall-front audio boutiques. 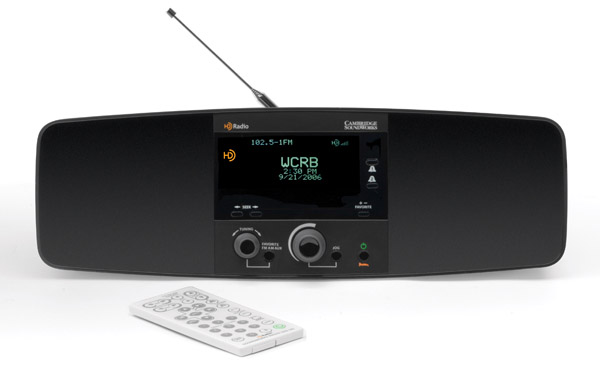 You got a good product, but they sort of fell into the Sharper Image category of “oh, this is nice, but I’d never spend that much money on it.”

The big difference, however, is that Cambridge actually has useful products that normal people can benefit from instead of hundreds of different back massagers.

Cambridge SoundWorks, now owned by Creative Labs, decided to close all of its retail outlets and focus on direct marketing — reducing their and our costs.

Not everyone is a believer in HD Radio, and we’re not necessarily sold on the concept either. But look at it this way: Radio is here to stay. Why not give HD a shot if it really does offer more programming options for free?

There’s just one flaw in that otherwise impeccable logic. The HD signals are often spotty at best, especially getting 15-20 miles into the suburbs, away from a metro radio signal.

Here in Boston, you’ll have a hard time getting a good HD signal — or the stations-between-the-stations — on the South or North Shore or beyond Framingham. (West Coasters — think of that as deep into Orange County from Downtown Los Angeles.)

The other big flaw with the SW820 is that the antenna is a bitch to screw on, requiring a special wrench that comes with the radio. Don’t lose it, or you can forget about HD programming no matter where you are.

The radio does sound very good, and tuning via the knob instead of repeatedly mashing buttons is a relief. When you do get an HD signal, you clearly notice the difference.

Like it or not, HD Radio sounds good, and for the $100 you’ll spend on Amazon for this baby, Cambridge SoundWorks makes their case.

Don’t miss John Guilfoil’s “Five ways to listen to music without an iPod” story, in The Boston Globe.