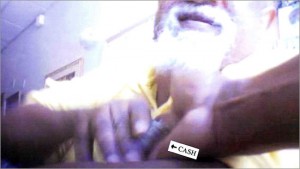 When State Sen. Dianne Wilkerson’s arrest hit the news, everyone knew that there would be a messy fallout. Other Boston-based power brokers, in the state and city levels, would likely be implicated, leaving the leadership stuck with a major public relations hit and ongoing anxiety. The public, of course, would become increasingly skeptical of their leaders. This fallout was rearing its head today.

Chuck Turner, a charismatic Boston City Councilor,‚  who was arrested last week for allegedly taking a bribe, was all over the news again this week. Not only did Turner hold a press conference to claim innocence and plead for public support, but Maureen Feeney, city council president, preempted that 2:30 p.m. press conference with one of her own.

At 1 p.m., at City Hall’s Curley Room, Feeney said that while she respected Turner’s rights to claim innocence, thought the investigation would render him ineffective as a councilor. Feeney had already, and unilaterally, stripped Turner of his committee assignments.

But Turner, a Roxbury member of the Green-Rainbow Party, said he was being abused by city officials and members of the media.

“Obviously, the press is working to publicly destroy my reputation before I even have an opportunity to have a day in court,” he said. “Since I am being tried by the media and my fellow councilors, I have made the decision to publicly defend myself. That is, I will act as my own lawyer in this media trial in which I find myself. Some argue that I should keep quiet for fear that I may make some statement that can be used against me. So be it! I will not sit back silently and allow my reputation to be ripped to shreds.”

He added, “They are criminals.”

Chris Faraone, writing for The Phoenix, observed the situation.

Turner stepped to his crowd as planned. Even before a working microphone arrived, he launched into a condemnation of his colleagues and the pad-and-camera-wielding culprits who he deems responsible for his predicament.

The crowd was energized. Everyone expected fireworks, as the councilor’s operatives circulated an announcement declaring war against the media. “My main concern is that I am not being tried by a jury of my peers, I am being tried by the Globe, the Herald, Fox News, Channel 7, Channel 5, etc…,” Turner wrote and went on to say

Vocal support rang loudly. Some folks belted pro-Chuck chants, while others were noticeably angrier. When it became obvious that the sound system was busted, one participant suggested that evildoers “Stop controlling the truth and let him be heard.” “Get him a mic,” another person yelled.

Welcome to the surreal state of Massachusetts politics in 2009. It is sure to be a constant stream of drama, accusations, arrests and subpoenas.

The public is left to watch, and wonder who to trust.