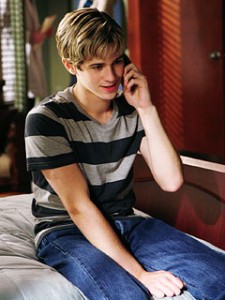 The CW‚ sensation’s apparent apology to‚ gay fans‚ for not letting Dan and Chuck get it on that‚ time in Chuck’s limo was to offer everyone’s favorite‚ boy-loving‚ little brother, Eric Van der Woodsen (played by the adorable Connor Paulo) a spot as a series regular.

But‚ according to Entertainment Weekly, the recently-outed fan favorite turned the network down flat!

See, the deal that was put before Paolo was not for all episodes produced, or ASP as it’s called in the biz. Rather, the contract called for him to appear in only half of this season’s 25 episodes, which is about what he’s been averaging as a recurring player, anyway. So, basically, by remaining a free agent, he’s got the same gig with none of the strings attached.

“He probably didn’t want to commit to being ninth fiddle on a show,” theorizes one TV agent. “Sure, he’ll make less money, but he’s free to accept other opportunities in TV and film should they come along. It’s not a bad move if you have aspirations to do other things.”

Methinks Paolo, who off screen is straight until pics prove otherwise, didn’t want to be typecast. Maybe he wouldn’t worry so much if the writers gave him‚ steamier storylines. Like say, a Cruel Intentions-inspired‚ fling with sexy step-brother Chuck. Just sayin’.