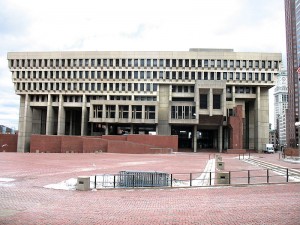 In my college days I used to walk from my North End apartment to the Emerson College campus, which, for the most part stretches around the corner of Boylston and Tremont, just south of Boston Common.

Each time I made that walk, I was startled by a wondrous juxtaposition. From the century-old colonial architecture scattered throughout the city, to the tiny cobbled stone roadways that take one from Quincy Market to Little Italy, a stroll through Boston can truly seem like a trip to our simpler, storied past.

That is with one notable and unfortunate exception: Boston City Hall.

This monstrosity in architecture is in the heart of Boston proper at the Government Center Plaza, just a stones throw away from Fanuel Hall. The building is nine-level, horizontally-oriented brutalist design ( by Kallmann McKinnell & Knowles). It is a rectangle, I guess, but is an inverted pyramid in elevation.

It is doubtful a tourist would last 10 minutes in the Hub, without coming face-to-face with this albatross that was planted in some of city’s most treasured real estate more than 40 years ago. One cannot help but wonder: How is it possible that city officials allowed this to happen? Exactly how potent was the LSD that was evidently handed out at planning meetings in the early-1960s when this attempt to merge “Old and New Boston” first started.

Ugliness can be interpreted in countless different ways, but according to a recent report by VirtualTourist.com, the planet is starting to reach a consensus on at least one thing: no building on Earth is less attractive than Boston City Hall.

Virtual Tourist observed that the building gets routinely criticized for “its dreary faƒ§ade” and “incongruity with the rest of the city’s more genteel architecture.” They listed City Hall as one, in their top ten list of the “Worlds Ugliest Building.”

This is not the first such dishonor for the building. In 2004 the Project for Public Spaces identified it as the worst single public plaza worldwide, out of hundreds of contenders.

Here is the rest of Virtual Tourists list of the World’s Ugliest Buildings.